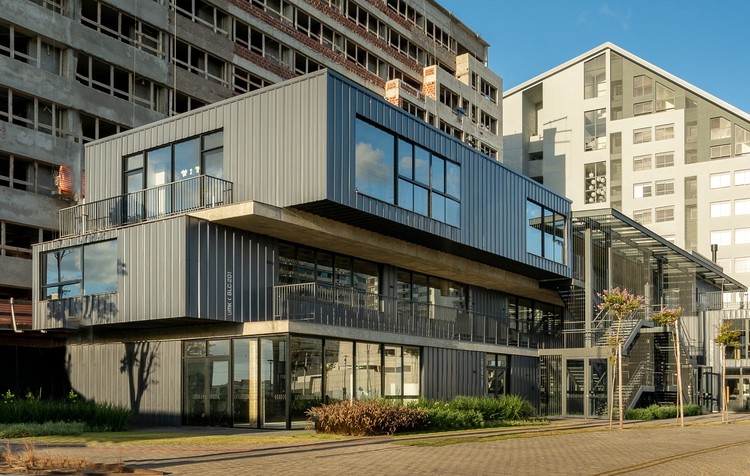 Text description provided by the architects. The Una Park is the newest development in Pelotas, RS. The developers had experience in the construction of condominiums and sought to create a new project with a new approach to the city. After long research on the new urbanism and urban vitality, came the idea to build The Una Park, a planned and open neighborhood, about 10 minutes from the city center of Pelotas, in an area responsible for the urban expansion.

The innovation center Una Makers, a short building, occupies the corner of the site and guarantees the human scale for the street, creating a permeable ground floor on the main avenue of the neighborhood.

The composition breaks the shape into small boxes delicately placed on concrete slabs. It has independent functions within the complex and was designed to be occupied by local startups and creative companies. A fab lab occupies the ground floor and is run by an innovation company.

The large windows encourage the use of the front gardens for experimentation activities, events and aim to connect the community to the building's uses.

A workspace occupies part of the ground and second floor. The other four office spaces are rented by different local companies. On the third floor, a common terrace was created in order to minimize the height of the building on the street level and also as a social point for the Innovation Center. This terrace, besides being a space for socializing and enjoying the view, can be configured to host an outdoor conversation, a projection event, or even a party.

The open stairs are the main characteristic of the facade and act as the materialization of the building's objective: to open up to the community, to be visible and transparent. This innovation center plays an important role in activating not only the facade of the block but also the entire new neighborhood.

The finishes help to create an urban environment and a contemporary look for the facades. Metallic gray finishes contrast with white walls on the upper floors, while natural finishes such as concrete and wood are used on the ground floor.

The tensioned cables generate a sculpture right at the entrance and create an interesting play of light and shadow in the building. As they are the main characteristic of the facade, we made that the flow of people in the open circulations creates a building in motion. 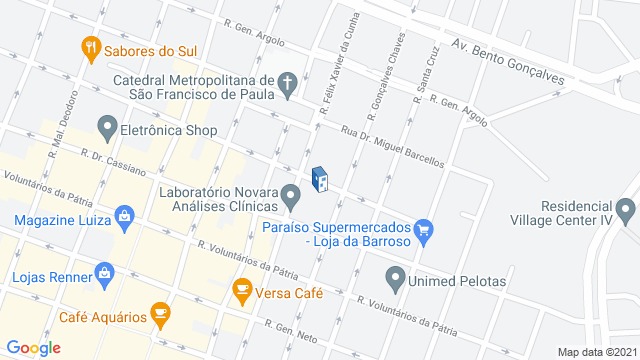 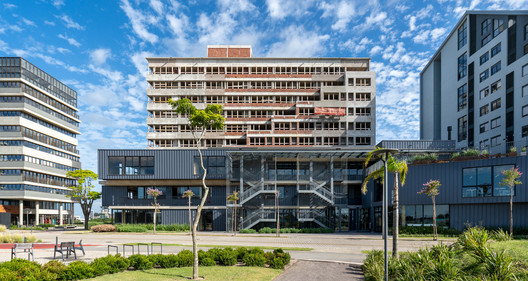