Save
Architects, not Architecture: Elizabeth Diller
Share
Or
Copy

The list of countries includes Singapore, Australia, the United Kingdom, France, Denmark, the Netherlands, South Korea, China, Ukraine/Lithuania, Mexico, and the United States. You can find the complete list of events at www.architectsnotarchitecture.com.

Archdaily is bringing you a selection of the World Tour’s most celebrated talks. Today, Elizabeth Diller:

Elizabeth Diller is the co-founder of Diller Scofidio + Renfro (DS+R). Diller’s cross-genre work has been distinguished with TIME’s “100 Most Influential People” list and the first MacArthur Foundation fellowship awarded in the field of architecture. Besides many internationally renowned projects, she led two cultural works significant to New York: The Shed and the expansion of MoMA.

In her insightful talk, Diller shares many different sources of inspiration that have influenced her work’s vision and style. Among them is follow guest speaker Steven Holl. Being a child of Polish Holocaust survivors that immigrated to the United States, she grew up in Manhattan, the site of many progressive societal movements. She started studying art as she was primarily interested in photography and film but later switched to architecture school when she had discovered her love for three dimensionalities. This is where she met her husband and partner, Ricardo Scofidio, whom she later established an architecture practice with. In her lecture at “AnA” she talks about the ingenious ways she incorporates unique ideas stemming from films into her designs.

Founded in Hamburg in 2015, the international event format Architects, not Architecture brings to stage what usually goes unseen. At each of its events, two well-known architects are asked to speak about themselves instead of their award-winning international projects. They talk about their path, influences, and experiences as they dive deep into their intellectual biography. This enables a better understanding of their work without them even mentioning it.

Last year, “AnA” opened its archive to create a source of inspiration and entertainment by sharing some of its unique talks from the first 35 events. Archdaily brought to you some of the talks in full-length by speakers including Daniel Libeskind, Tatiana Bilbao, Dan Stubbergaard, Mario Botta, Sadie Morgan and Kjetil Thorsen. 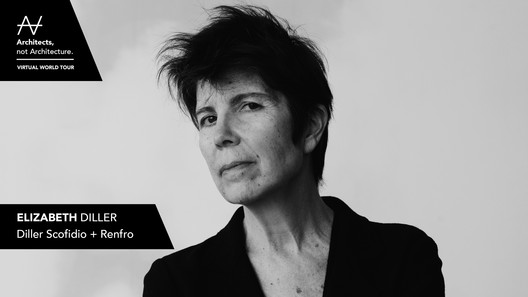