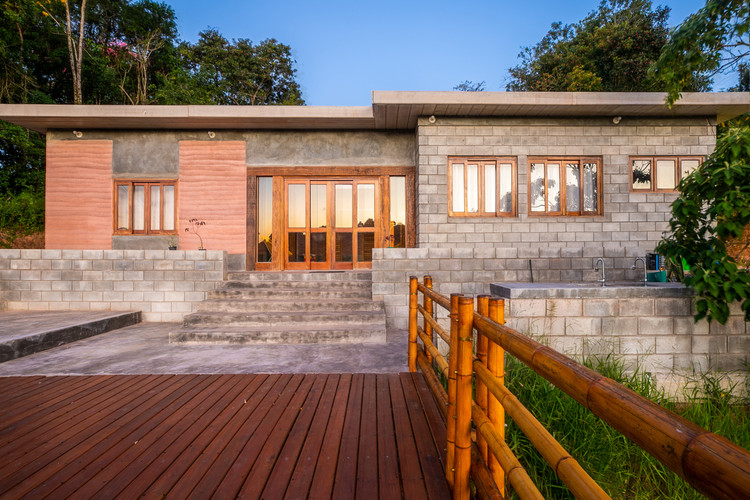 Text description provided by the architects. Ecocasa Atelier is a social residential design-build project in Brazil. It serves as proof that it is possible to build sustainable contemporary houses at an accessible price thanks to the most precious tool in architecture - design. The clients, whose main income is from art, music and event management, consented that the process be driven by environmental, material and human constraints. The available resources were used to their maximum potential with the least ecological impact.

The scope was ambitious and at the same time very limited by the low budget. On a 1.800 m² plot of land in São Roque (1h from São Paulo’s city center), the optimal program was: a two-bedroom house functioning both as - housing and a party venue that would guarantee the family's livelihood. Due to strong collaboration of all stakeholders involved, it was possible to build a 285 m² ecohouse.

Function defined form, that defined materials: the walls of the house are built partly with earth and partly with cement, placed in between precast reinforced concrete slabs. There are three main volumes: a rammed earth living room, two CEB bedrooms and a wet area (kitchen, bathrooms, laundry and storage) made from exposed structural concrete blocks. The dimensions of the spaces were determined by use, and the implementation by bioclimatic impositions. The intermediate residual space became the central courtyard of the house covered by a 3x7 m glass skylight allowing the indiscriminate entry of the entourage inside.

The hilly terrain forms a natural lookout facing the sunset. Therefore, the west façade was enhanced with an 85 m² external area that followed the same logic as the main house, concrete blocks define the outdoor cooking area designed with remaining precast elements from the slabs, and where the land drop is sharp, a 6m-high balcony was built structured by locally sourced and treated Mossô and Hatiku bamboo. The 40 m² flooring was built from repurposed wood.

The resilience of Ecocasa Atelier is multifaceted, it can be seen as the ecohouse fulfills its scope whilst seasonal rental serves as the primary source of income for its residents until hosting events is allowed again. It is also demonstrated through the ecological construction site that had a temporary bamboo structure to store materials and the implantation of a composting toilet for the workers. Another example is the complete water cycle inside the property (semi-artesian well, bio sewage treatment and infiltration basin). And in addition to using earth from site to build the rammed earth walls, all wood is refurbished. Plus, during the construction phase, a training course was hosted to the general public on building with bamboo.

By integrating conventional construction techniques with natural building ones, it was possible, in just one year, to transform an empty plot with a small forest reserve into a dream ecohome. 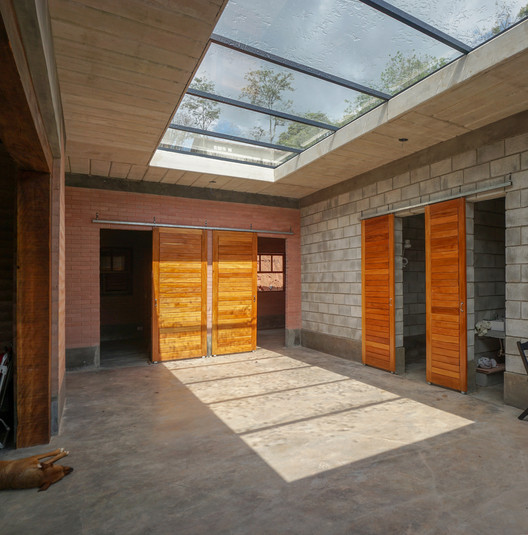