The Media Architecture Biennale 20 (MAB20) will take place as an online event from June 28th to July 2nd, 2021. This edition will shift the focus on media architecture from the aesthetic spectacle to societal improvement. How can media architecture contribute to better cities, civic engagement and sustainable ecosystems? The event will close off with the MAB Awards, highlighting outstanding projects in this newly emerging field at the crossroads of architecture, urban planning, interaction design, art, and informatics.

Digital media has changed the way we shop (Amazon), travel (Airbnb) and even romance (Tinder). This shift has huge repercussions for our material living environment as well. Media architecture is the relatively new discipline that relates to this interaction of media and architecture, says Martijn de Waal, co-organizer of The Media Architecture Biennale 20 (June 28th – July 2nd, 2021). “The biennale is an investigation into how architects and urban planners can learn from digital media engineers and designers, and the other way around as well. As a result, the way digital media is integrated in architecture and urban planning will improve.”

“Media architecture is a combination of disciplines like architecture, urban planning, digital media, design and art.”

So, it’s fair to state that media architecture is shaping our cities and with it our lives. The manifestation of media architecture is diverse: facades, smartphone applications and social media, urban screens, leds, projections or sensors and responsive environments, to name just a few. “It is a combination of disciplines like architecture, urban planning, digital media, design and art”, explains co-organizer Michiel de Lange, who as De Waal is a university researcher in the Netherlands. ‘The Biennale will explore the entanglement of media in our living environments. The central theme of MAB20 is that media architecture can play a role in almost all aspects of urban life, from climate adaptation to increasing social cohesion. But the outcome of this interaction is always physical. “Media architecture is already shaping our cities physically by modifying infrastructure and creating new typologies of buildings.”

The new M+ Museum in Hongkong by Herzog & De Meuron is strong example of how media architecture is directly creating a new building typology. The museum, still under construction, has a standing tower facade that features as a giant screen in the city’s skyline. By displaying content related to the museum this type of media architecture extends the functionality of the traditional museum building.

Media architecture can be highly visible in the streets, for example as huge screens on buildings. At the same time, it can also be invisible, such as smartphone-apps such as Google Maps or Waze that enables people to avoid traffic jams. It can operate on a functional level, for example with motion sensors that guide us through a shopping mall by opening doors or displaying personalized adds on screens. But it can also be an artistic installation that raises awareness on social issues. De Waal: “As a relatively new discipline it is very dynamic and therefore not easy to define.” These different appearances of media architecture are addressed in the six categories of the Media Architecture Awards, that are handed out each the biennale. “Architects, artist, designers and digital media-professionals are invited to submit their work until Monday, April 12th.”, recruits De Waal.

To illustrate the diversity among the submissions in earlier years the organizers mention two nominees:

Kipnes Lantern is an art installation in 2017 by the National Art Centre in Ottawa, Canada. It was conceived in 2015 for Canada’s 150th anniversary. The art center is a Canadian landmark and with a huge led-installation transformed into a marquee tower named ‘The Lantern’. It was designed by Diamond Schmitt Architects and activated with visual content by Moment Factory, with the goal to create a memorable experience and to positively connect the general public with this festive national jubilee. “Art being projected on a landmark building is a type of media architecture people easily can relate to”, explains De Lange. “At the same time the technical implication can be extremely challenging. This was at the time the largest LED-screen in North America but still transparent to keep the underlying architecture functional.”

On the more experimental side of the spectrum is Archive Dreaming, a nominee in the category Future Trends & Prototypes. It is a 6 meters wide spatial media installation that employs machine learning algorithms to search and sort relations among 1,7 million documents. Users can actively browse and search through all the documents from the Ottoman Bank’s Cultural Archive, dating back from the 20th to the 17th to century. When idle, the installation ‘dreams’ of unexpected correlations among the 1.7 million cultural artefacts. The images are laser projected on a circular and immersive installation, designed by the artistic Studio Refik Anadol with technical support from Google’s Artists and Machine Intelligence program. “This is an art project that uses architecture as a presentation form”, says De Waal. “Media architecture is not only about buildings and cities, but it is also a way to imagine our living conditions of tomorrow. These artistic projects can be a way to explore possible scenarios for the future.”

This 6th edition of the Media Architecture Biennale, MAB20, was postponed from November 2020 due to corona and will now be organized as an online program, from 28 June to 2 July 2021. The critique that media architecture is just an innovative way to create 21st century “decorated sheds” is put aside by the organizers. “Yes, media architecture is about aesthetics and expression, and about lights and bright colors. But more and more it is acknowledged as an agent for urban change”, counters De Lange.

The theme of MAB20 is therefore Futures implied. “We want to investigate how media architecture can contribute to desirable futures. How can it trigger social as well as ecological sustainability?” But also, a more critical approach will be taken: “Who owns the data that media architecture generates?” The urgency of media architecture is underlined during the recent corona-pandemic. “With screens and billboards being important in the routing of masses and regulating social distancing. Or in a more emotional way by projecting statements of support to healthcare workers on a large building that is visible to tens of thousands of people. Media architecture can make the static architecture more dynamic and responsive.”

To illustrate media architecture as an agent for positive change, again two examples from previous submissions to the Media Architecture Award are presented:

The 350-meter-tall One Shenzhen Bay tower is altered into a huge barometer depicting the actual climate conditions in the Shenzhen area. An actual weather station is set upon the roof of the skyscraper collecting the real-time data on wind speed and direction, air quality, temperature and humidity. Also, information about the tides is obtained from the internet. With data visualization technology, these data are expressed in four ‘chapters’ of nature’s charm. Later on, a smartphone app was introduced with which strollers could ‘donate’ theirs steps to a funding program for the social needy in Shenzhen. The amount of funding was depicted on the façade of the Bay Tower. De Waal: “This installation brings people’s attention to the natural climate. It is an entertaining as well as informative way of connecting citizen with their living environment.”

In downtown São Paulo a 3-km long overpass was built in the 1960s to speed up crosstown traffic. The side effect was urban decay in surrounding areas due to noise and pollution increase. After a long campaign, residents succeeded to decrease opening hours of the overpass for cars and turn it in a sort of park for pedestrians. Local artist Alexis Anastasiou invited four artists to screen on the buildings. This media art festival was ideally looked upon in a walk on the overpass, inviting people to come over at night while it was closed for cars. Shortly after the Festival, the City Council approved the overpass to open for cars only on weekdays from 7AM until 8PM. According to De Lange, here media architecture takes on the role of “an urban theatre” where citizens can take notice of each other, and playfully interact. “It functions as an agent for social change in an urban environment by stimulating the redesign of a dysfunctional infrastructure into an accessible and, as a result, more inclusive park.”

Submitting to the MAB Awards:

To submit your project, click HERE. The awards ceremony will take place on July 2nd, 2021 as an online event featuring the selected nominees and winners. The ceremony will be live-streamed. The categories are:

All nominees from the MAB20 Awards will be featured in a series of articles on Archdaily.

Besides the MAB Awards, there are open calls for the Student Awards, Late Breaking Work (Academic Papers) and Demos & Posters.

NewsArticlesMedia Architecture BiennaleMAB20
Cite: Jeroen Junte. "How Media Architecture Is Shaping Our Cities – And With It Our Lives" 26 Mar 2021. ArchDaily. Accessed . <https://www.archdaily.com/959178/how-media-architecture-is-shaping-our-cities-nil-and-with-it-our-lives> ISSN 0719-8884
Save 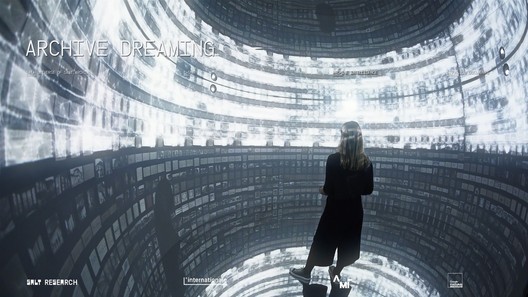