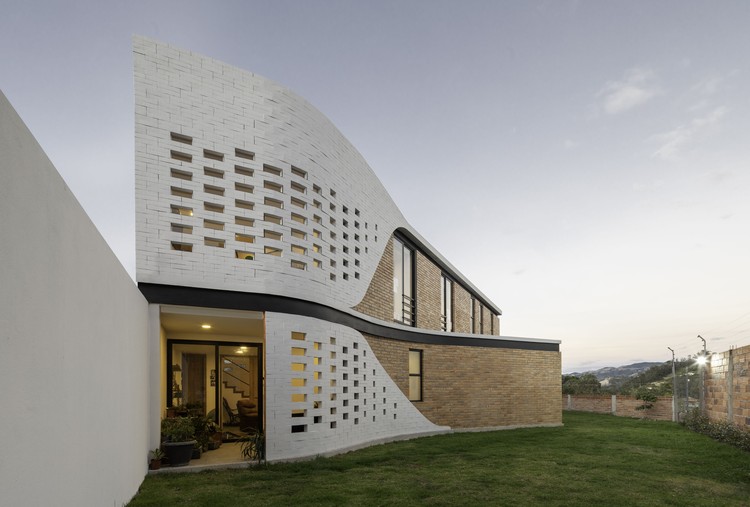 Text description provided by the architects. Architectural design processes are currently strongly influenced and characterized by the use of 3D modeling and computer-aided manufacturing tools, which has facilitated the exploration of a new series of formal, functional, and structural configurations whose impact within current architecture is invaluable, as it transforms it into an interactive, non-linear and complex process.

Through the use of certain parametric design techniques, today it is possible to explore the creation of geometries from a family of basic parameters and to understand the programming of the formal relationships between them. Forms can be generated that have the ability to vary and adapt to multiple requirements or specific criteria. Under this preamble, House K explores the possibilities of configuring a brick created specifically for this house; a brick with holes in the interior, of low weight, without joints on its 4 sides, and that allows through its holes the reinforcement with steel rods to comply with the demanding regulations of earthquake resistance in construction.

The applied parameters were quite simple. First: The curved lines that define the two volumes of the house that at the level of the mezzanine bifurcate to travel and define separately the contour of their volumes. Second: The openings that progressively reduce their size and are distributed horizontally and vertically on all the surfaces of the walls. Third: The size and particularity of the bricks. Fourth: The place of reinforcement with steel in the bricks. Fifth: The ascending and descending curves that originate from the mezzanines and make up the lines of the eaves of the roofs of both floors. Sixth: The direction of the wind to take advantage of cross-ventilation, and finally, the incidence of the sun on the east-west faces of the walls in order to achieve thermal comfort inside, adequate lighting and textures of light and shadow in their spaces.

It is important to mention that the participation of the clients in this house was of vital importance, as they gave us the necessary confidence to carry out the design with these CAD systems of complex, non-traditional ideation, which otherwise would not have been possible, and with them Together, the interior and exterior spaces of the house were configured one by one according to their requirements so that their habitability goes according to what they looked for. The interesting thing about this design is the use of a traditional material such as brick in conjunction with advanced software such as Rhino, for digital design and planning; and the construction, materialization, or transition to the real plane, through a traditional construction system of brick walls with mortar and steel rods, without displacing the local labor force, but with some assistance from special tools such as templates, precision plans, and systems verification, to achieve the final result.

Brick is one of the oldest construction products and is still more widely used today, however, over time and even in the Latin American context the construction process with this material has not undergone great variations, since the construction system and the possibilities for configuring masonry are those that we all already know, however, through the use of advanced digital ideation systems, the famous phrase of Louis Kahn has been put into practice: “Even a common, ordinary brick ... wants to be something more than it is ". In a country where digital manufacturing is not yet an option due to the high costs that this implies, giving way to the design of elements with complex configurations was a challenge that we at House K have managed to achieve. The simple fact of having placed the 92 small aluminum and glass windows in the spaces that the bricks leave free in the walls, one by one, with a qualified craftsman of the place, and see what the sunlight does to the interior of those spaces, it was something very rewarding.