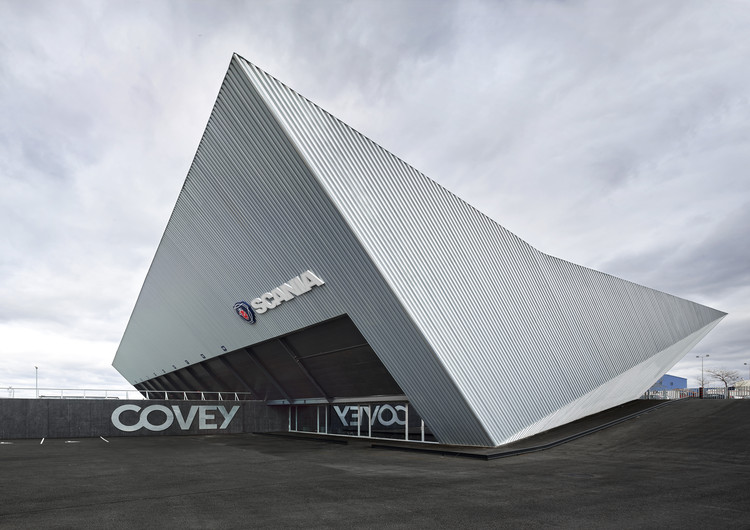 Text description provided by the architects. On the right bank of the mouth of the Rio Tinto, on a plain adjacent to the Nicoba marshes, extends the largest industrial estate in the province of Huelva. At the gates of it, on a bordering plot between the urbanized and the emptiness, the Swedish truck manufacturer Scania decided to place its new facilities in the region.

The main qualities of this location were the vast infrastructure that surrounds it, offering the opportunity of creating a complete visual exhibition, where architecture becomes an advertising element as well as a functional container.

The requested program was simple, but with opposite demands. On the one hand, a large diaphanous, horizontal and zenithal illuminated space for the set-up of trucks. On the other, an exhibition and commercial area at several levels with natural light for administrative space.

The requirement to create a building of imposing character in its surroundings led us to encompass the different parts of the program in a single volume, with a single material, trusting that this decision helps to fill the gaps that a relatively small program creates. In this way, the steep slope of the plot was used to help meet this interest, creating a large esplanade in front of the access area, delaying the position of the retaining wall and also superimposing the program vertically on the head of the building; all to increase the volume by increasing the height from 10 meters in the rear area to almost 20 meters in the main west corner.

This set of volumetric needs is solved by a simple formal operation, an inclination or abatement of the facade planes until reaching almost 45º, in a gesture that begins continuously and symmetrically, and is modified according to the specific conditions of each orientation. This prolonges the threshold between inside and outside with no added elements, hence increasing the area of the building protected from the weather.

To achieve this it was decided to use a structural system of beams and pillars bent and post-tensioned, a hybrid scheme that stiffens the structure until no more bracing elements are needed than the main porches of the building. A direct and precise construction system of dry joint metal coatings were also used, materials belonging to industrial rhetoric, but also to the motor world, seeking a natural dialogue with the true users of the building. 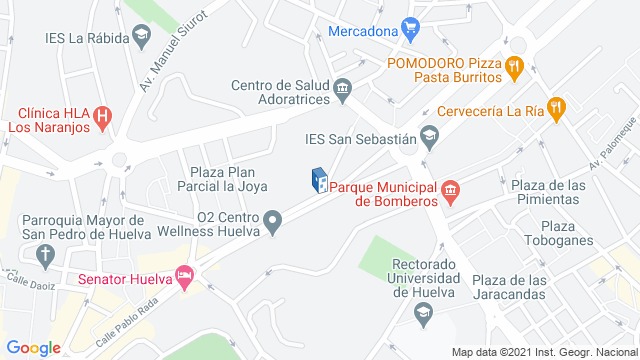