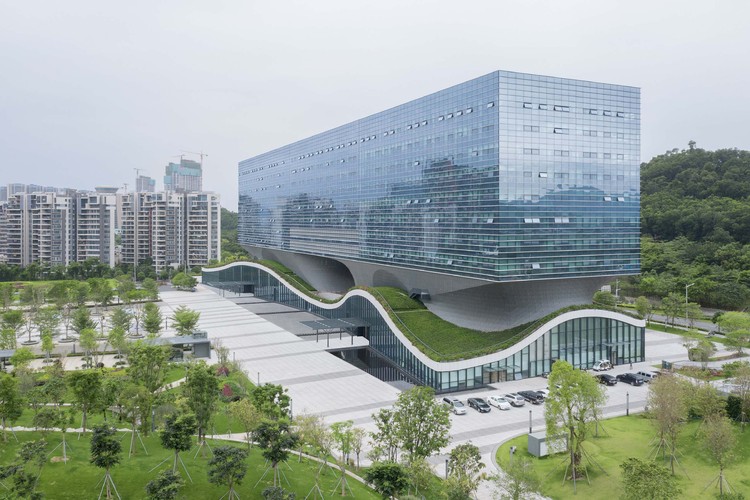 Text description provided by the architects. The project is located at the junction of Guangming High-Tech Park and Guangmingcheng Railway Station gateway. It is mainly accessible to the public for administrative services and to government workers for routine office tasks. The project covers 81,200 square meters construction area, with a height of 50 meters.

There are two small hills about 30 meters high standing at the center and south side of the site respectively. In addition, the plot was full of piles of earth dumped from surrounding construction sites, leaving little space for dumped earth for the projectwhich indicates the difficulty and high cost of earth dumping around this area. Based on those site conditions, we proposed to preserve the two hills, which can reduce the excavation work while also helping form a group of green hills that extend to the Niu Mountain on the north side of the plot, thereby blending with the ecological protection area of the District. The solution not only solved practical problems, but also responded to the low-impact development mode advocated by Guangming District.

The project mainly consists of two functional divisions: office spaces and public service spaces. According to different functions, we divided the building into two blocks with distinct forms at vertical level. The upper rectangular volume is office space, while the lower block functions as the public service hall and the conference hall, whose rooftop of the lower volume is shaped like an undulating surface. Combined with large areas of transparent French windows, the flexible curved plane creates a relaxing and friendly atmosphere.

The two separate architectural volumes are non-consecutively linked by curtain walls made of curved perforated aluminum panels. The “broken” section of the curtain walls leaves a 50-meter-wide hole, from which people can see the Niu Mountain behind the project. The holistic building resembles a vessel floating on the mountain. Moreover, the perforated aluminum curtain walls allow natural wind into the three atriums on the upper volume, forming a breathable section structure.

The office spaces on the upper part are well lighted by the atriums. Giant air vents turn into modern sculptures in the atriums. Staggered volumes above the atriums are used as conference room and corridors, producing a dynamic ambience as well.

In the public service hall on the bottom, the undulating roof descends to the interior center of the hall. People can walk, from the central area of hall, along the outdoor stairs into the garden on the second floor. In order to respond to the undulating rooftop, the ground features some sunken spaces, which lead people to the lecture hall on the underground floor. The design approaches above were used to weaken the sense of ritual commonly seen among government buildings. We hoped to draw on such a unique spatial form to make the citizens experience the different image and service attitude of Guangming District. 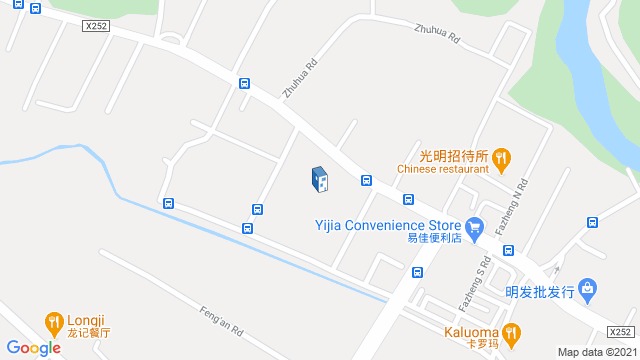 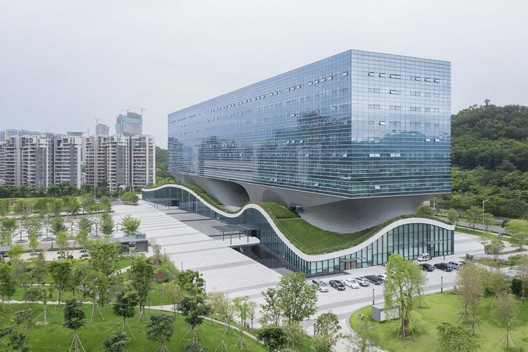