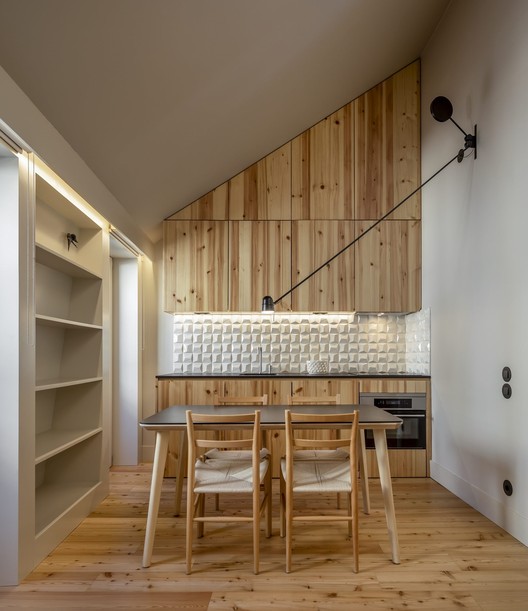 Text description provided by the architects. The main purpose of this intervention was the expansion and comprehensive rehabilitation, interior and exterior, of an urban building located in Travessa da Portuguesa, in Lisbon. This building consists of 3 floors, attic and basement and was built in the second half of the 6th century or in the beginning of the 7th.

From the attic level up, the roof was demolished, converting it into a new duplex with a living space and a terrace on the upper level overlooking the Tejo River. Facing the street, a green zinc mansard was built with three balcony windows aligned by the original ones under them. This green zinc mansard contrasts with the roof made in clay Marseille tiles.

The green color so characteristic of the Bica neighborhood - painted on window frames, shutters, rails, and solid wood doors - was also elected to coat the traditional azulejo tiles that cover the façade of this building. The deep color glaze of these tiles, which were exclusively produced in an artisanal way for this building, give chromatic rhythm to the street and highlights the architectural elements in limestone such as stonework, pilasters, and cornice.

Regarding the compartmentalization inside the building, we corrected the organization of functional spaces, favoring the living and dining rooms that have windows facing the street. The two bedrooms turn to the windows and balcony to the back and the Kitchenette and bathroom stay in the most interior space.

The color used on the exterior walls was brought inside and used in the entire building. The tiles that make the façade are also part of the interior, in the bathrooms. For the backsplash of the kitchen counters, we had three-dimensional tiles produced whose color was tuned by the painting of the walls. The floors are made in Riga wood and the cabinets in acer plywood. The furniture was chosen or designed to suit the architecture, to ensure full coherence in relation to the principles underlying the dwelling of this building. 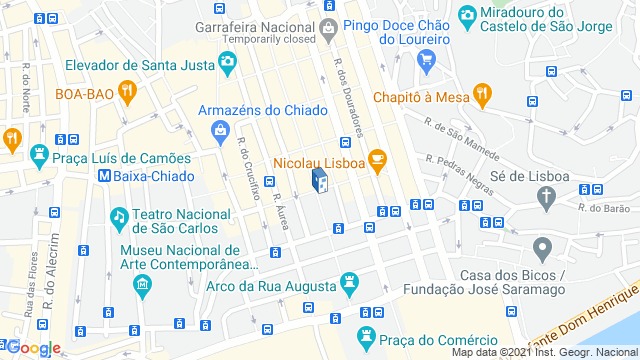