Text description provided by the architects. The story to be told by Agemar is one of openness to the horizon, fluidity, continuities, whiteness, light-and-shadow composition. Athens on the other hand is dense, varied, contradictory. Agemar is not a corporate building. It is more of a ‘house’ for one of the biggest worldwide maritime group of companies, a rather big house, though. In every project, there is a magic moment that changes what you look at and allows the idea to emerge. This is the moment that generates the story to be told by the project. This was the moment when standing οn the bridge simulator, the architect had a sense that a sea voyage is about a destination, that is, a horizon and a direction. The proximity to the sea and the maritime nature of the client were coupled with the architect’s personal experience.

A Sea Voyage became Agemar’s story. The voyage to the sea though is not only literal; Being interested in the ways our “internal sea” influences what we do and what we are, Rena sees design as the bridging of two worlds: one, our personal world, the “space within,” this internal sea of hopes, desires, and all we are; and the other, the external world of reality. Every creative activity integrates the two worlds or at least tries to. Agemar is a building that talks about the horizon and the opening to the sea. Horizontality and directionality were joined in a fluid geometry that generated the flexible non-finite form.

The long horizontal lines of a ‘floating in the sea’ fluid form that expands or contracts, adapts to the urban scale, and differentiates the building from its surroundings, create a strong corporate image in the cityscape, and set up a dialogue with the intense Attic light. In a ‘thick wall’ strategy, they transform the external view into a ‘movie-strip’. An ellipsoidal atrium gives spatial intelligibility and generates a play of light and shadows. Agemar covers 30,616 square meters of floor area in two buildings. Building A, Administration, houses the entrance foyer, company museum, and library on the ground floor, open-plan offices on five floors, owners’ and executive offices on the sixth floor, and an owner’s lounge, a canopy, and an extensive roof garden on the top floor.

Building B, Crew, has an amphitheater and a restaurant on the ground floor, offices on three floors, and a roof garden. The two buildings connect underground on four levels, with a company gym and a twenty-five-meter swimming pool, bridge and engine simulators, and auxiliary spaces on the first underground level, and parking for 330 cars on the other three. As if in a metaphor of a boat at sea, materiality distinguishes between the white of the floating upper part and the gray of the base; white marble cladding CNC cut with a stainless-steel substructure in the upper part of Building A, a GRC prefabricated claustra and gray sanded marble for the base. Building B, on the other hand, is covered by a vertical garden.

Continuities in form and spatial definitions, in material choices and detailing give the interior an airy quality. The structure is steel-reinforced concrete. Prestressed beams and metal suspension columns support the large cantilevers. Great care is given to efficient energy consumption and all environmental aspects. 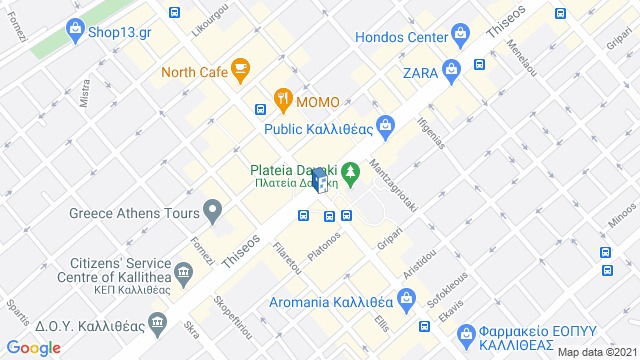