Save
Are Suburbs the New Cities? Exploring the Future of Suburban Development in the United States
Share
Or
Copy

What was once seen as a slower way of life is seeing new developments and mixed-use centers that rethink density, walkability, sustainable impact, and diversity- all critical factors that are considered when planning some of the largest and most dense urban cores in the world. In 30 years will there even be such a thing as a suburb anymore? Or will these areas find a way to redevelop their own to become an extension of a city?

It’s first important to define what these suburbs are- not just “city adjacents” like the conglomerate of urban centers located in the Bay Area in California, but more stand-alone cities that have long been associated with urban sprawl and the reliance on automobiles and the dominance of low-rise, low-density, single-use, private buildings that characterizes them. While for many years, there were distinct architectural markers that clearly delineated what was urban and what was suburban, that boundary has begun to blur, making the city outskirts feel not so different than the cities themselves.

Take New Rochelle, a town largely known as a commuter town just North of New York City- the perfect escape from the hustle and bustle of one of the densest urban centers in the world. With easy access to transportation to and from Manhattan and a more reasonable cost of living, it’s an excellent example of a suburb that was designed out of the necessity to be just out of reach of urban life. But now, it’s identity is evolving away from being the escape from New York City, and rebranding itself as the “New New Rochelle”, or a town with its own development features, businesses, hotels, high-rise apartments, and cultural epicenter. It no longer has to be the second-tier sister city of New York but is becoming a renewed suburb, with an intentionally designed master plan, and its own downtown corridor. With a new zoning initiative, New Rochelle has carved out its own economic rebirth that includes 12 million square feet of new development the town will soon be its own thriving city where art and culture can blossom and businesses can thrive.

In another example of an American city, Columbus, Ohio has borders typically defined by a highway system that circumnavigates multiple neighborhoods, business centers, and prominent universities. A closer look at this thriving Midwest city shows a relatively small downtown area, with minimal residential buildings and even fewer major business headquarters. Instead, the cultural drivers are located just beyond the bounds of what one might expect to be the business district, and even farther away from the city center are the neighborhoods that act as the buffers between city and suburb. Accessible mainly by highway transit, these areas just on the border of the city limits have reinvented themselves, built commercial offices, desirable residential buildings, and increased local walkability to entice Columbus residents to live, work, and relax there without the need to travel towards the inner-city areas 20-30 minutes away. In the Northwest area of Columbus, Dublin Bridge Park has established itself as its own microcosm of Columbus, with new developments, businesses, restaurants, and an established sense of urbanism.

It’s clear that the suburbs we once knew won’t be the suburbs of the future. As technology, urbanism, and ways of life evolve, so do our cities. The areas just beyond them are reacting in parallel and redefining themselves to address 21st-century problems. If you’re leaving the city for the suburbs, you might not be making the big lifestyle change that you expect- but for the better. 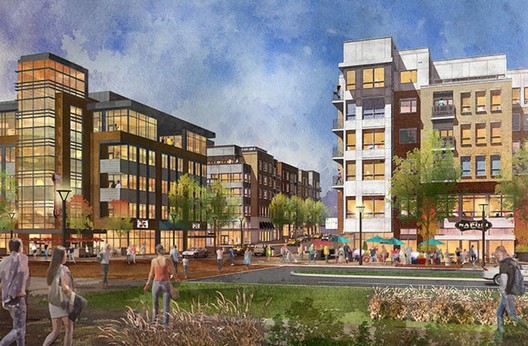