ON-A Architecture Studio has designed a proposal to cover the FC Barcelona football stadium with a rooftop park in Spain. Converting the stadium into a 26-hectare park, the project aims to re-nature the stadium's surrounding area. Called Nou Parc, the design features a new topography that would also create a forest for the city of Barcelona. 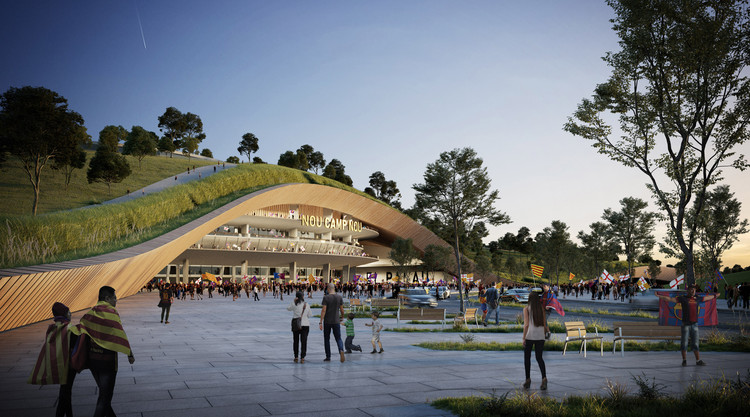 As ON-A outlines, Barcelona currently has just over 6sqm of green areas per inhabitant. According to the World Health Organization, cities should have a minimum of 9sqm. The proposal for the Nou Parc ​​aims to turn the area into a great green lung using bio-architecture as a strategy for re-naturating. The design would reform one of the most significant locations in the city of Barcelona, the Camp Nou, creating a blanket of green forest that would place facilities attached to the stadium below the surface of the new park. The resulting new topography would hide the services linked to the stadium, and in turn, the stadium would function independently of the park.

"The Nou Parc project shows how nature would come back to cities without losing buildable space, raising the topography and creating a blanket of green forest above the stadium and its facilities, which would remain below the surface of the new park. Currently this area is a closed concrete space and only 8% of green areas. Consequently, an island effect is generated, separating the neighborhoods of Les Corts and Zona Universitaria."

The project would include a 2.4km walking and running route, as well as green open spaces and leisure areas. At the top, visitors could enjoy 360º panoramic views around the stadium. In addition, two lakes would cool the surrounding area and collect rainwater, which could be reused for the irrigation and maintenance of the park. This project was also made to foster connections between the neighborhoods of Les Corts and the University Area. 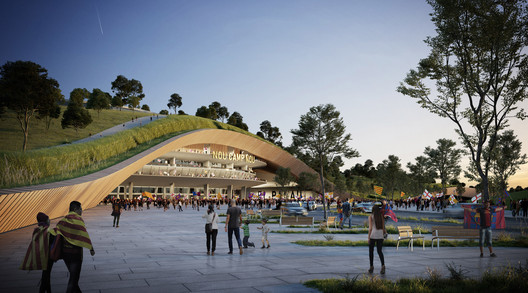