Architecture, engineering, and planning firm HGA has unveiled the design for the John Adams Middle School Performing Arts Center in Santa Monica, California. The project is made to be a dynamic arts environment and incubator for students to explore and develop their artistic voices. As a gateway to the campus, the project will establish a strong visual identity for the school while engaging Santa Monica College and the city. 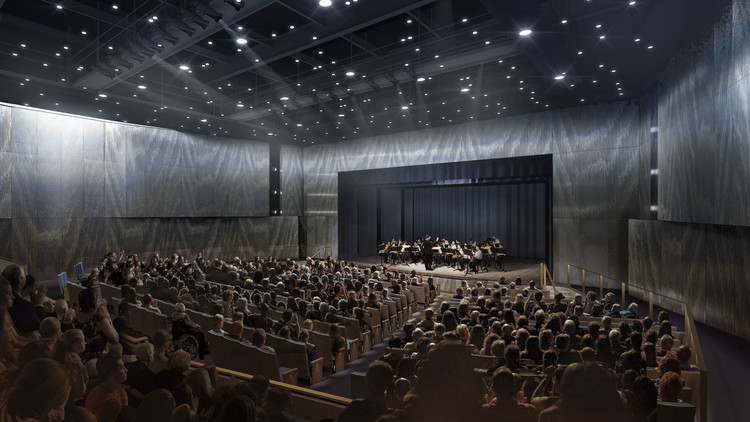 The team explains that the Center’s open design was created to form an active hub that promotes community building around the arts and facilitates interaction between diverse student populations, faculty, artists and the surrounding community. As a space that for both the Santa Monica-Malibu Unified School District and Santa Monica College, it is designed to integrate the distinct needs of both its middle school and college users.

Extending along the public face of the John Adams Middle School (JAMS) campus on Pearl Street in Santa Monica, California, the new Center will establish a strong visual identity for the school. The openness of The Center’s design aims to reflects the school district’s goal of creating a thriving, active hub that promotes community building around the arts. Performance and rehearsal spaces open to an outdoor courtyard that takes advantage of the temperate climate to create flexible spaces for informal gathering.

In addition to serving its host middle school campus, the Center will support Santa Monica College as a venue for its performing arts and educational programming, strengthening the relationship between the two schools. The Center will feature a 750-seat auditorium to meet the needs of the JAMS music program. A large, flexible rehearsal space will be included alongside the auditorium, supporting music and dance as well as hosting community events and classroom functions. Practice rooms, dedicated classrooms, offices and libraries for orchestra, band and choir classes will also be part of the program.