✕
Save
Robert Sonneman: "If You’re Looking at Architecture Trends Then You Are Yesterday’s News"
Share
Or
Copy

This week David and Marina are joined by Robert Sonneman, Founder and Chief Creative Officer of SONNEMAN—A Way of Light, to discuss his design process, his relationship to architecture, contrivance in design, how business school informed his success, technology's impact on lighting design, responding to design trends, working with younger generations, the value of design, the necessary transitions for his company to continue after him, simplicity, and more.

Robert discusses his upbringing in New York City and its influence on his work and life. (00:00)

Robert discusses building a business with the George Kovacs, being introduced to modernism and the Bauhaus movement, studying law, creating his first product line and deciding to start his own business. (08:00)

Robert on meeting investors for his business:

I told them that I was going to design and manufacture modern lighting and that it would be connected to the European ideals of functional modernism—Bauhaus and beyond. They said to me, ‘Go and put together a business plan by next Sunday’, which I did. In the business plan was the investment I was looking for and their participation and in 45 minutes they said, ‘You got it. Go do it.’ So at 23, I went out, took a building, set up a bank account, and set up a factory. And I started to design the line. (12:57)

Robert tells a story about his designs being selected for permanent display in the Museum of Modern Art and getting Bloomingdales as a client within the first 5 months of his business. (14:17)

Robert discusses how he became a designer and how being a designer was perceived at that time. (17:30)

There was a designer named Neal Small […] One day I was visiting with him, I was sitting on his terrace downtown in Chinatown and we were smoking a joint and he said sat me, “You know Robert you’re a great designer.” And I said to him, “What’s a designer? (18:10)

“I don’t know that being a designer was a thing at that point… I don’t know. I think being as a designer a profession is a much more ethereal concept than what was active in the 60s. […] Being called a designer… I didn’t that that’s what I was doing. I thought I was doing a lighting line.” (19:15)

Robert discusses his relationship to architecture, studying architecture, and its influence on his work and his design process at the beginning of his company. (21:20)

“My evolution really came when I worked with a young architect out of Pratt. […] I hired him to work with me in design and he had such great thinking. I was so jealous and he was jealous where I was, but the two of us could come together and do really innovative thinking. And that changed my life. At that point, I knew I didn’t want to make lights I wanted to do architecture… and that ethic only went on for the next 50 years.” (22:04)

“Architectural thinking gave me a real foundation of design integrity, aesthetic, and structure that you had to reconcile on a legitimate basis.” (26:50)

Robert gives his opinion on design trends and how he responded to the post-modern era. (29:30)

“When Michael Graves did the Portland building. That was a very important step. The reason it was a very important step for my generation is that when I was taught about Mies, the 1939 pavilion, and the form from function pathos, we could do black, white, natural wood… and maybe one thing of red—but just one thing—in the space. […] So we did not know how to use color. We just didn’t use color. So when Graves did the Portland building and the Sunar Showroom, which was all about color, it was shocking. That was I think the most important thing that came out of the post-modern experience for me, to learn to use color.” (33:25)

Robert discusses his design principles and why he focused on lighting. (35:50)

"One of the things you have to do when you design something is if you’re going to be true to some principles, you have to avoid contrivance. If we start to do something and get into a place that is more contrived than straight-forward… you can’t do that, even if you think it’s going to sell. Is that a smart play? Maybe not short term, but it is longterm because you have to stand for something. That for me is fundamental. To do a design that is legitimately functional and develops form in a simple a straightforward way free of contrivance.” (36:40)

“That was an ethical principle for me. I have to tell you that there were tough times along the way where I did a lot of crap. The market thought it (the work) was good, but I didn’t think it was good. There were periods that just for preservation and economics I had to do it and I hated it. I felt sort of dirty doing it.” (38:10)

Robert discusses his office, its workflow, and working with young talented designers. (41:30)

Robert discusses how technology changed the lighting and shares a story about changing an entire lighting line just months before it debuted. (44:50)

“All of the new introductions (products) I was going to come out with was pinned to the wall. We were sitting there with our CEO and our VP of manufacturing and I looked at the line and I said, ‘This line sucks.’ And this was in November and our line has to be finished by July […] I went home that weekend and started a whole different direction using LED.” (46:00)

Robert discusses the design process in this office and changing it to build his replacement and getting clients who will pay. (51:56)

Robert discusses the key factor that led to his success: an understanding of the business side of the company. (01:04:30)

Robert discusses natural and ‘artificial’ lighting, lighting’s relationship to architecture, and his distaste for decorative elements. (01:16:20) 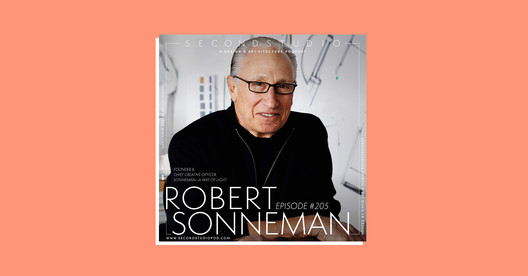