Save
Vincent Callebaut Architectures Imagines a Garden Footbridge Above the Seine River, in Paris, France
Share
Or
Copy

Vincent Callebaut Architectures has created “The Green Line”, an inhabited garden footbridge prototype that “generates its own energy from renewable sources, recycles its own waste and wastewater, and optimizes its needs thanks to Information and Communication Technologies”. Inspired by a fish skeleton, the proposal links the Bercy Village to the Masséna district in Paris, restoring urban connections and connecting the 12th and 13th arrondissements. 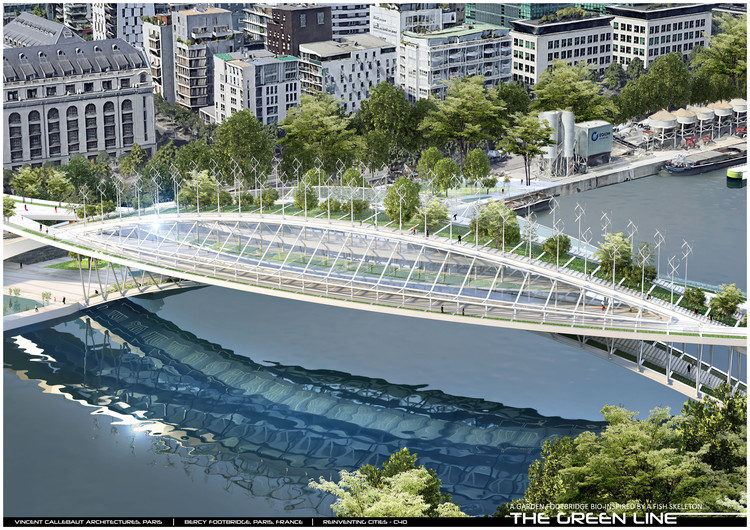 Promoting social and cultural innovation, The Green Line generates a functional urban continuum between two entities separated by the Seine, the Parc de Bercy, on the right bank, and the Jardins Abbé-Pierre - Grands-Moulins, on the left bank. Through flexible and mutable shared spaces, Vincent Callebaut Architectures imagined a structure that “adapts to the needs of new generations and to new constantly evolving uses”.

Dedicated to "Parisculteurs" or Paris farmers, the bridge’s panoramic rooftop and horticultural greenhouses host 3,500 m² of vegetable gardens and orchards. In fact, in permaculture, 25 kilos of fruits and vegetables/m2/year (87,500 kilos/year) will be co-cultivated in this space. Seeking to generate awareness of eco-gastronomy and alternative consumption, the project develops organic agriculture, democratized and co-cultivated by the new urban “consumer-actors”.

Vincent Callebaut Designs a Modular Mass Timber Tower on the Island of Cebu, in the Philippines

On another hand, in the bridge, Vincent Callebaut integrated classrooms and training spaces, a research center, co-working laboratories, incubators, and organic restaurants. A hybrid variant of the “Bow-String” typologies, the structure is developed like a 220 m fish skeleton. The primary structure is made up of two double arches, while the secondary structure is made up of a triplex of trays suspended from the first structure. The bridge does not cross the river perpendicularly, but it has a range of 220m for the upper arch and 153m for the lower arch. The foundations of the building-bridge are independent for the two upper and lower chords but built in line with the quays so as not to alter the flow of the river and to avoid becoming an obstacle for river navigation.

Meeting the new generations' needs for flexibility and nomadism, The Green Line is also an example of ecological exemplarity through sustainable management of air and water. In fact, the project aims to establish a large 8,500 m² amphibian garden, creating a total of 12,000 m² of new green spaces and phytoremediation lagoons that will develop an endemic biodiversity corridor. Four garden themes will be developed, including Fish Gardens, the Clean Air Garden, and the Carbo-Absorbent Garden. Finally, actively participating in the fight against urban smog, the structure improves air quality. 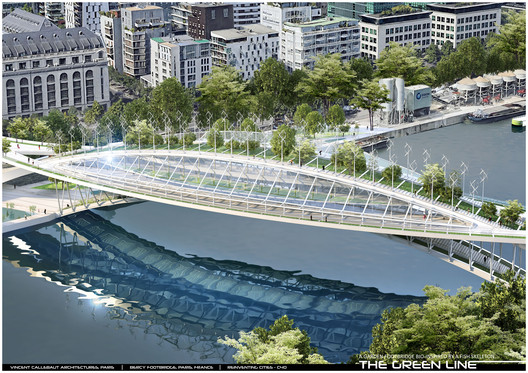