ODA has shared a design concept for the Academy of the Hebrew Language headquarters in Israel. Made to be an orientation point for the cultural district, the new building was located between the Israel Museum, the Israeli Supreme Court, the future site of the National Library, the Knesset, and the Hebrew University. The design aims to offers a fluidity of perspectives and connections between the Academy and its surroundings. 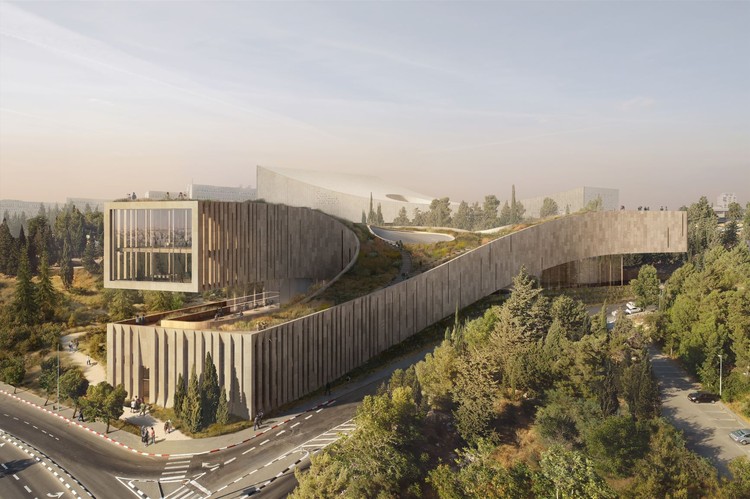 The design team made the proposal as a place for "worlds, languages, and history to collide and meld together, as Israel has been for centuries." The plan reacts to the curve of Stephan Weiz Street while responding to the Jerusalem Botanic Gardens and National Library beyond with the creation of a public park. Formally, the project features a multi-level, landscaped rooftop as an extension of the surrounding park. In turn, the building’s form, like language itself, connects visitors and citizens alike.

"The Academy of the Hebrew Language represents, and also determines, how the Hebrew Language has continually evolved and grown from ancient times to modern day. The academics who drive the academy are part of a continuum that represents the history and traditions of a people. ODA’s design is meant as a translation, quite literally, with the façade design expressing the linear arrangement of the Hebrew phrase referencing The Tower of Babel and its myth of the origin of multiple languages. Abstracted from the historic original Hebrew characters, to the modern square Hebrew characters and ultimately applied to the façade through vertical graphic manipulation, the Jerusalem stone façade can be developed into a literal expression of the Hebrew language."

Three distinct program elements —academy, common spaces/conference center, and exhibition — are arranged around a 56-foot-high central atrium and permeable ground floor. ODA designed the Academy to incorporate key sustainability solutions such as shaded outdoor terraces, low water plantings, rainwater collection, and reduced heat island effect. These are most evident in the pocket garden and small inner courtyards which bring natural diffused light to the interior of the building. There is also a solar shading system on the exteriors that controls heat gain and energy consumption. 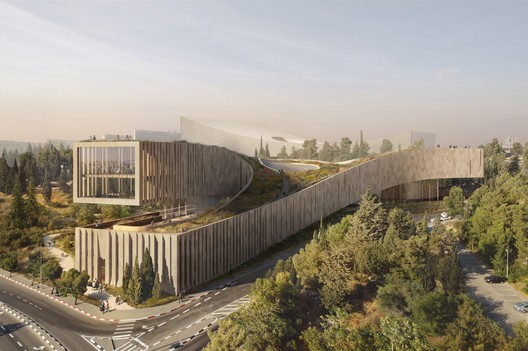