Text description provided by the architects. The house is located in a gated community in Porongo, Santa Cruz. The house is raised, separating itself from the ground and creating a simple volume along 54 meters throughout the site.

It resolves itself in a single level. Formally, the house is composed by a single volume that exposes the structure on the facade, highlighting the columns, which follow a perfect modulation and create a rhythm. The columns are separated from the walls, creating a free circulation around the perimeter.

The design closes itself on the main facade and opens to the rear garden. However, the existence of an interior garden behind the facade allows the entry of natural light and the contact with vegetation in every space on the inside, therefore enhancing the relationship with nature. The dialogue between interior and exterior was key on the design of this house. The corridors on the perimeter work as an extension of the gallery and allow an easy transition between inside and outside.

The house has a linear organization that follows the axis dictated by the interior garden. Above the garden we can find a concrete pérgola that follows the rhythm of the structure and creates different kinds of shading on the interior. A main corridor organizes the circulation, starting on the garage and finishes on the master suite.

The program highlights the social aspect of public spaces, focusing on the flexibility of combination of spaces in order to host a greater amount of people. The kitchen and the living-room open themselves and integrate with the barbecue area, thus allowing the people use it independently or as a whole. 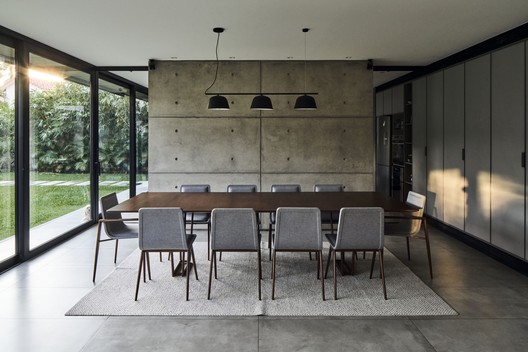