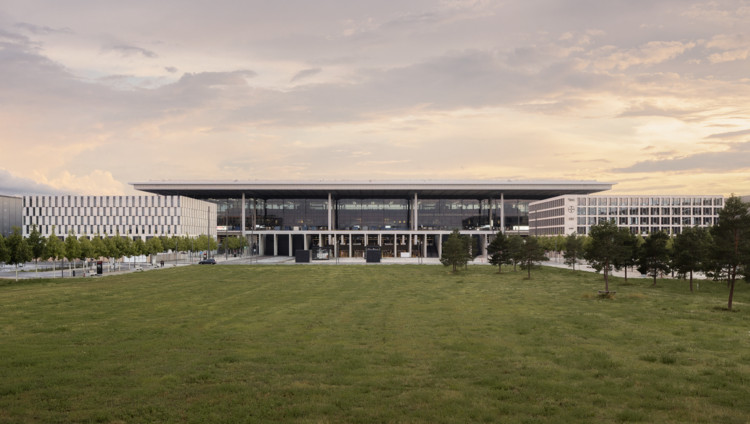 Text description provided by the architects. The Airport consists of the passenger terminal, the Airport City in the center of the parallel takeoff and landing runways, as well as maintenance areas to the west and service and cargo areas to the east. All elements are aligned along with the overall axial system and form an architectural and functional unit. The newly built railway, road, and aviation hub converges at one point and thereby ensures that the distances between the different transport modes are as short as possible. Starting from the entrance in the east, the traditional Brandenburg landscape has been remodeled to create cohesive urban open space in the Airport City at the center of the airport.

The overall design aims to create a building with a succinct identity in which the structural elements are a harmonious part of the functional layout: The architects were faced with the task of creating a central international air traffic hub for up to 27 million passengers per annum in the form of a functional and organizational unit for all aspects of a modern airport. A prerequisite for the design was therefore an urban design concept that ensures that the airport is perceived as a coherent system, taking into account future developments and changes, including an increase in capacity of passengers.

To achieve this, gmp at the very start developed design principles compiled in a type of manual that was to be followed by all stakeholders in the design process. The design manual established the town planning, functional, and artistic design concept for the airport—at all scales—from the urban design aspects to the main axes and dimensional systems through to the building volumes, materials, colors, and furniture. Furthermore, the entire scheme has been developed on a basic horizontal grid of 6.25 meters. Multiplied by 7 this results in the supermodule of 43.75 meters, which corresponds to the parking width required for a category C aircraft, including the Airbus A 320, the most frequently used aircraft in Berlin. This large grid of 43.75 m determines the spacing of the main piers with their distinctive passenger bridges as well as that of the columns in the check-in hall. The play with the common denominator breaks the dimensions of a plane down to a human scale and can be experienced at all scales-from the large building elements to the space structure and down to details such as the pattern of the natural stone flooring.

Modularity and maximum functional flexibility were also key parameters for the construction and design of the terminal building. It lies between the land-side area and the apron and forms the architectural and structural core of the airport. It consists of the main hall with its piers. The generous and clear layout of the terminal hall in combination with the colonnade motif of the transition between architecture and landscape, defines the characteristic style of the new Berlin Brandenburg Airport. The high and airy main hall accommodates the key functions, such as check-in and baggage handling. It is where the passenger flows converge from the air-side area and the land-side area, i. e. from the railway station and the drop-off area. A special solution was found for directing passengers to the separate arrival and departure levels of the terminal and for channeling Schengen and Non-Schengen passengers along separate routes. This is achieved via three-story bridges leading up to the gates.

The clear spatial arrangement and the natural lighting ensure easy orientation and create space with a high amenity value. This is further enhanced by the approx. 20 m high facade of the hall. Its structure is based on a pre-tensioned cable system in which the only structural members are horizontal profiles, thereby allowing the passengers unobstructed views of the entire outside panorama. Supported by nearly 30 m-high steel columns spaced at 43.75 m, the 49,000 square meter roof of the 220 m-long terminal building covers in one large deck the different functional areas from the drop-off area to the piers, connecting the land-side and air-side areas. 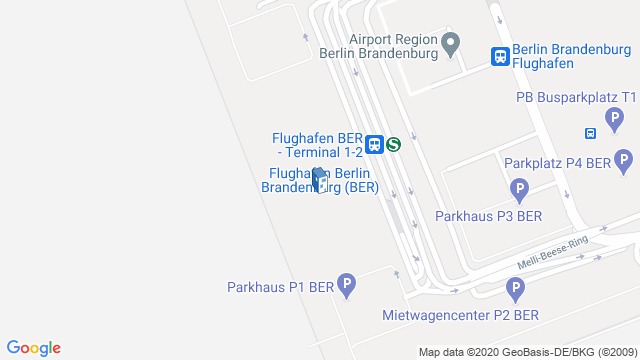