Google has released new details of a sprawling, 80-acre plan to transform downtown San Jose, California. Designed to be a corporate campus, the "Downtown West" development will emphasize public open space and parkland. Google intends to make the area feel less like a traditional corporate development by incorporating office space, housing, retail and other uses within a new urban neighborhood framework.

According to Google's Design Standards and Guidelines, there will be up to 5,900 residential dwelling units and over 500,000 gross square feet of program accommodating retail stores, restaurants, and cultural centers. Working with SITELAB urban studio on the proposal, the team includes 15 acres of open space and up to 7.3 million square feet of office area. Located at the edge of Downtown San José and at the confluence of the Guadalupe River, Los Gatos Creek, and transit gateway, Downtown West bridges its surrounding natural and urban environments. The public realm network adds 3.5 miles of new and improved bicycle facilities to connect with nature, transit and nearby neighborhoods.

Laura Crescimano, founder SITELAB urban studio, noted that, "Downtown West is designed to be a true part of the city—the opposite of a traditional corporate campus. Our team worked with Google to draw on the uniqueness of the location to propose a place where urban life and nature can coexist." The project features a series of design elements, including a central plaza area named The Gateway, a 1.5-acre Creekside Walk, and The Meander, an “urban promenade” made with a communal lawn for outdoor programming. 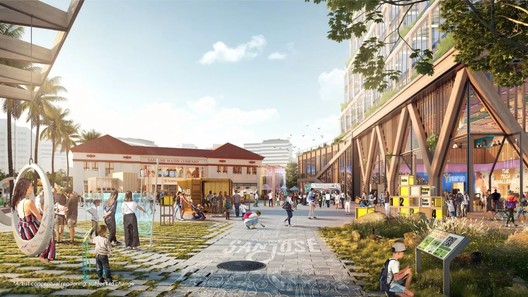