Save
The Winners of Re-use The Roman Ruin: Piscina Mirabilis
Share
Or
Copy

Piscina Mirabilis is a Roman reservoir built by Emperor Augustus in the 1st century AD, in order to feed with drinking water the headquarter of his western Mediterranean war fleet. It was dug out a tuff hill, and it is based on a regular grid of pillars and arcs. The vaulted reservoir is 15 meters high, 72 meters long, 25 meters wide and features 48 brick pillars.

The large stone cistern stored water from nearby Lake Miseno and fed it to a naval base where the emperor’s armada was stationed. The site is on the eastern edge of the crater lake which sits on top of a natural rock formation and was formed by an ancient volcano that is no longer active. Pliny the Elder and Younger were both stationed here during the Mount Vesuvius eruption of AD 79 and it was used as a plot location for the film Ben Hur.

Participants of this competition were asked to reuse this space as a Contemporary Art Museum.

The jury has chosen, as winning projects, proposals who showed a deep knowledge of the artifact, who demonstrated to be aware of its complexity and felt respect for it. The winners showed how a new intervention, operating with an approach of distinguishable layering, must belong to the contemporary realm of architectural language, responding to present-day necessities, but it should also be felt in continuity with the historical narrative of the building.

The notion of reuse we promote is strictly related to the concept of life inside space. Martin Heidegger, in “Building, Dwelling, Thinking”, explained in a phenomenological way how the main purpose of a building is dwelling, and how a building acquires meaning through the act of dwelling. A building can be considered alive when someone dwells it. We propose a notion of reuse that continues this idea, especially in terms of architecture ecology, which is, in our opinion, one of the main themes of our time. Regarding ancient ruins, most of the time the structure has been so brilliantly well constructed to last over the centuries, and so freely thought in terms of space that they can easily host new functions, solving the new needs of the civilization's continuous development. This is why we think it is preferable to restore a ruin rather than build something new aside when it is possible. Reusing ruins with a new function, responding to our time and space necessities, it’s an ecological choice of our generation.

This competition was organized by Re-Use Italy 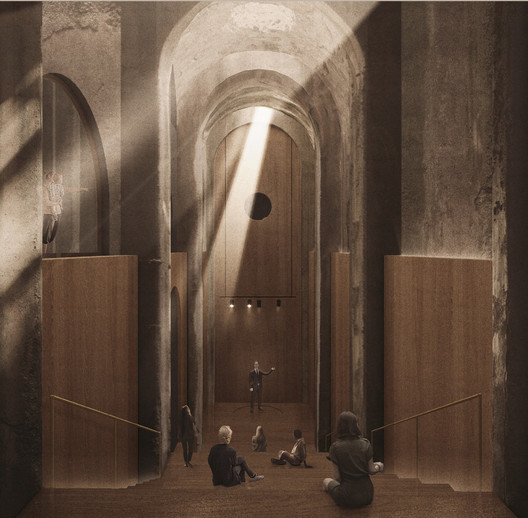