Save
The Winding Saga of the Restoration of the Narkomfin, an Icon of Soviet Constructivism
Share
Or
Copy 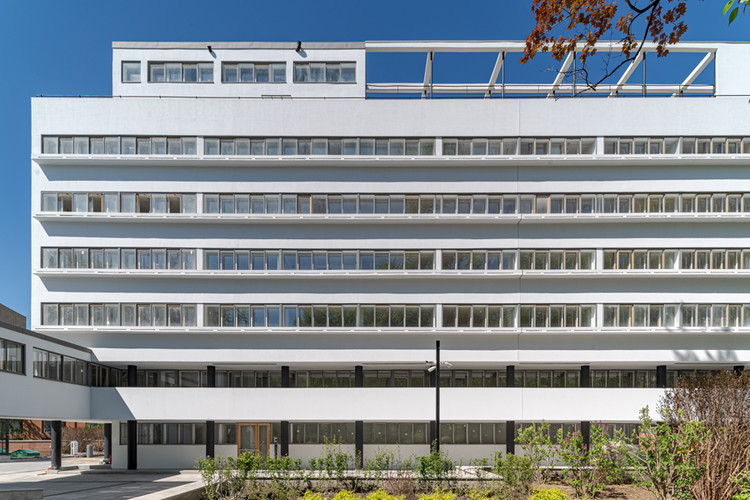 Today, however, all that has changed. The Narkomfin’s walls gleam white, piloti revealed, the ground level opened up, and window frames restored from plastic to the original timber—the list of clarifying moves goes on.

“We had to clear out all the parts which had been added later on,” Alexey Ginzburg, the grandson of Moisei and lead architect of the renovation, told Metropolis. “[It] is very close to the original design. We studied the smallest details of the house…trying to follow the consideration of all the original parts, remaining in such a way that people can now touch them and see them below a protective layer, these remaining historical parts.”

To Alexey, the project was like an archaeological study. With every detail of the building originally designed tailored to a specific function, his team had to explore their original purposes, using old photographs and drawings.

“It looks very simple from the outside, very puristic, very minimalistic,” Ginzburg continues. “Yet it’s incredibly complex inside. The way it was constructed was at the edge of the technological possibilities at the time and this was not just example of modern way of life, but also an example of the most up-to-date construction techniques.” All of these features of the structure Ginzburg sought to illustrate throughout the conservation.

“For the rest of the building, we tried to make replicas according to the original construction methods, as described by [Moisei] Ginzburg in his book Housing.”

Alexey along with his father Vladimir, also an architect, Alexey had been investigating ways to finance and execute the conservation for 30 years prior to 2016, when work actually began.

“Vladimir was trying to attract the attention of different state organizations in the late Soviet Union in the middle of the 1980s,” recalls Alexey. “I started to help him when I was studying architecture in Moscow. The project was not of interest to the state [and] it was complicated for private companies who were also interested.”

Originally designed to house high-ranking members the USSR’s People’s Commissariat for Finance, the Narkomfin provided two-story apartments with living spaces that make the most of the evening light by facing west, while bedrooms face east, letting in the morning sun—a hallmark of High Modernism. Most importantly, the Narkomfin provided shared kitchens, dining rooms, washing facilities, a café, gym, library, and kindergarten, features which were in line with communist ideals and inherently feminist, helping to emancipate women from the labor of housework. Doing so was radical and at the time, making the Narkomfin a testbed for a new way of living.

But this way of living wasn’t to last. By 1942, original tenants had been evacuated, and new tenants and those returning put illegal kitchens into their apartments while the building’s rooftop, originally designed as a place for recreation, became a penthouse for the Commissar of Finance Nikolai Milyutin. Furthermore, earlier in 1932 (the year the Narkomfin was completed), official Soviet policy was to reject Constructivism, deriding it as a “foreign import.” By the 1980s less than half the building was occupied.

“The idea of a communal residential building was only alive the first decade the house was open,” said Alexey. The building’s social functions were sporadically used but later abandoned.

More recently, the Narkomfin was occupied by artists, creatives, and the like, who were willing to put up with the yellowing plaster in exchange for reasonably cheap rent in the center of Moscow.

“These days it is more inviting to hipsters than historians,” Natalia Melikova, a Moscow-based photographer and founder of the Constructivist Project, told the Guardian in 2015.

Now owned by developers Liga Prava, which bought the building in an auction, the Narkomfin will be home to private tenants. The original design had 43 apartments and four additional temporary, “hostel-style” dwellings. Now, there are 44 apartments—all of which were sold before work was completed—and two rentable “hotel suites” as Alexey describes them. (Final engineering checks still need to be made before people can move in.)

As for the shared spaces, all have been restored, including a solarium and terrace atop the roof. The kindergarten and café space, however, will now be a “public center,” which the new owner is currently finalizing as a space for events and exhibitions. “The main idea is that the building will be open to not just residents and will play an important role in explaining Russian vanguard architecture to the public,” added Alexey.

The grandson of Moisei is keen to make the new tenants aware of their surroundings. “I have contacted all of them trying to explain to them the meaning of the building and how it should be maintained properly,” he said. He is also eager to dispel misinformation about the way of life that the Narkomfin facilitated: “There is gossip that Narkomfin was a commune where a communal lifestyle, like a hostel, was proposed after the revolution. This is not true.”

Rather, Alexey describes the building as “a socially determined tenement house.”

The Narkomfin isn’t the only structure to be restored in the area. Another building, a former laundry nearby, has been restored by the same architects. “We wanted to show not just a few restored structures,” Alexey says, “but a piece of the city, the urban tissue of that time and what this public space could be.”

NewsArticlesMoscowRussiaSoviet ArchitectureConstructivismMetropolis Magazine
Cite: Jason Sayer. "The Winding Saga of the Restoration of the Narkomfin, an Icon of Soviet Constructivism" 10 Sep 2020. ArchDaily. Accessed . <https://www.archdaily.com/947148/the-winding-saga-of-the-restoration-of-the-narkomfin-an-icon-of-soviet-constructivism> ISSN 0719-8884
Save