This article is part of "Eastern Bloc Architecture: 50 Buildings that Defined an Era", a collaborative series by The Calvert Journal and ArchDaily highlighting iconic architecture that had shaped the Eastern world. Every week both publications will be releasing a listing rounding up five Eastern Bloc projects of certain typology. Read on for your weekly dose: Trailblazing Churches and Controversial City Buildings.

Palace of the Parliament / Anca Petrescu

Bucharest’s monolithic Palace of the Parliament is a 700,000 tonne concrete embodiment of totalitarian megalomania and ego. Built by thousands of soldiers and “volunteers”, and designed by a team of 700 architects led by Anca Petrescu, the building follows the narcissistic specifications of Romania’s former communist dictator, Nicolae Ceaușescu. Construction started in 1984, but, due to its size and complexity, the building was not completed until 1997. Today, not only has the Palace of the Parliament become one of the city’s main landmarks, but it has also made history as the second largest administrative building in the world.

The opulent interiors mirror the grandiosity of the Palace’s exterior, housing thousands of breathtakingly lavish rooms which include Romania’s two houses of parliament, the Senate, the Chamber of Deputies, three museums, and an international conference centre. Today, while the Palace of the Parliament undoubtedly stands as an architectural landmark, it is also somewhat impractical, with sky high heating and electricity costs causing major headaches for city officials.

In the heart of Kyiv’s central Druzhby Boulevard stands the House of Furniture, a gem of socialist architecture with broad, sweeping curves. Built in the early 1980s, the building was conceived as both a trading spot and an exhibition centre for Soviet furniture designs. Under its characteristic curved roof, sustained by four poles, the building encases multiple floors, including some that were used to recreate the interiors of apartments.

Beyond its commercial function, Kyiv’s House of Furniture is also an indirect embodiment of the Soviet approach to consumption. Mass housing involved the standardisation of interiors and homes, and, to emphasise this, the building’s exhibits implicitly highlighted functionalism and practicality over ornamental value. Today, the House of Furniture operates as a shopping mall but has retained some of its original spirit, with several privately-owned furniture shops serving customers.

Crowned by a giant green dome, Chorsu Bazaar is the largest farmers’ market in the Uzbek capital. With a heavy concrete structure, the base structure embodies the starkness of socialist modernism, while the mesmerising turquoise tiling the dome typifies more Islamic influences, an embodiment of the Soviet Central Asian blend between monolithic modernist shapes and more ornamental local styles. The architecture of the current bazaar imitates that of the original building, which crumbled down during the 1966 Tashkent earthquake. The building contains three floors, with food stalls arranged in labyrinthic concentric circles on each.

Bustling with traders and shoppers every day of the week, it is a restless slice of life spilling into the streets of Tashkent’s Old Town. Beyond its main dome, Chorsu Bazaar is surrounded by an ecosystem of other stalls selling fruits, meat, souvenirs, and street food to feed the avid market-goers and delight the visitors that dare to get lost in the market’s surrounding alleys.

In striking contrast with the ornate churches nearby, St Bonaventure Cathedral resembles more a futuristic modernist monument than a place of worship. A Catholic church with Gothic features stood on this spot until an earthquake in the Bosnian city of Banja Luka in 1969 saw it toppled to the ground. The current church was inaugurated in 1973, and, after being damaged again by war in the 1990s, St Bonaventure reopened its doors in 2001.

A product of the era’s modernist trends, the church features a curved roof that rises up to a central tower. Adjacent to the main building, a spiral staircase leads up to the five bells at the top of a 42-metre concrete belfry. Absolutely unique, St Bonaventure Cathedral is one of the few examples of religious buildings constructed during the communist era, and a somewhat harmonious blend between Soviet architecture trends and the design elements of religious buildings.

Rising from the banks of the Mtkvari River in the outskirts of Tbilisi, this unusual wedding palace dominates the landscape like an enormous abstract structure. Its creator, Viktor Jorbenadze, is an unsung postmodernist icon, and an architect of genius whose daring and provocative buildings defy categorisation. The building’s suggestive shape is not a coincidence — the floor plans are based on anatomical forms, inspired by the architect’s mother, who was a gynaecologist.

Beyond its eyebrow-raising outline, the Wedding Palace was very much the wrong building built in the wrong place at the wrong time: a cathedral built in the atheist USSR, a Soviet celebration of Georgian national heritage, and a cultural innovation in an era remembered largely for conformity. Built in time for the inauguration of Tbilisoba, a Sovietised harvest festival, the Wedding Palace was supposed to offer Soviet Georgians grandeur and ritual while avoiding the anti-Communist ceremony of a church. But cheekily, Jorbenadze insisted on referring to it as a cathedral, and the lavish interiors, which feature hand-made stained glass, church-like frescoes, and decorative ironwork, implicitly evoke the ambiance of a church. However, it is the symbolism of the structure that is most striking: the main entrance is the vagina, the side chapels are ovaries, and man and woman are united as a new family, destined to create new life, in the ceremonial space of the “womb” which contains the altar. To this day, many weddings are held weekly in this unusual and audacious architectural gem. 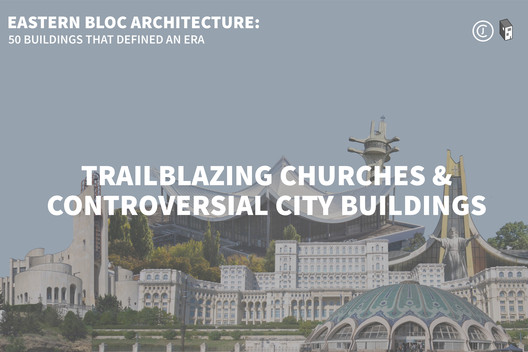