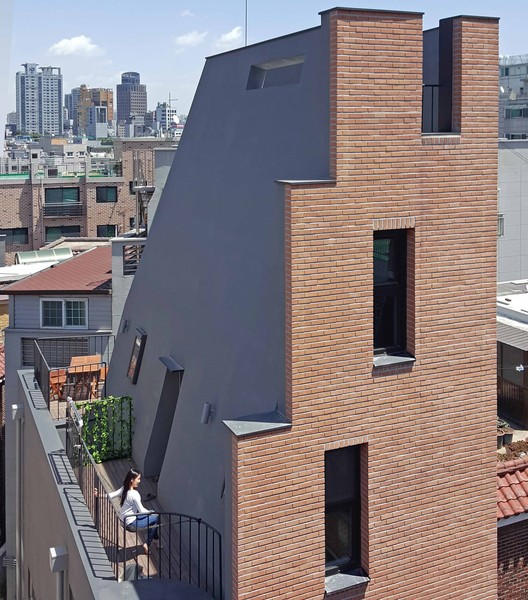 ‘Sadang Asteroid'. This is the name the owner gave the house. The reason for this is the size of the land where the house stands is small like the asteroid ‘B612’ in the novel Little Prince. TRU Architects designed a single-family house with five floors stacked on an area of ​​95 square meters in Sadang, crowded residential neighborhood in Seoul. In large cities such as Seoul, where there is a lack of vacant land, vertical single-family house on a small lot can be a reasonable alternative to the monolithic apartments.

'Sadang Asteroid' is a house built by a couple with children to live with their parents. Considering the notorious housing prices in Seoul, it is a practical advantage for an independent couple to build a house that reunite their parents with them and help each other. In order to respond to this new form of large family, we put the shared spaces and private spaces in turns on every floor to make buffers between the family members. There is a family dining room on the first floor and the parents' bedroom on the second floor. The bedroom of the couple is on the third floor and a living room used with the children is on the fourth floor. The fifth floor is for the children and a roof deck was planned for families gathering. Every floor has its outdoor area like terrace and garden for residents to enjoy the open air without going down to the first floor.

There is a backyard on the first floor for dining and growing vegetables. On the second floor, a terrace is planned next to the parents' bedroom. The couple has a bathtub facing terrace on the third floor and the fourth floor has a terrace with a tea table. The walls on the rooftop raised to create a cozy space for their gatherings. The building sits in a dead end in the middle of multi-family housings. The shape of the floor should be narrower as it goes upward due to the restrictions of laws and inclined walls should be placed to maximize the area. We designed the ‘crow-stepped gable’ with the slanted wall to express the front façade toward the alley and also to secure the maximum interior space. The wall on the first floor is curved so that the vehicle could turn in a dead end. For the exterior material, warm orange bricks were used which is similar to the houses to mingle with the neighborhood.