The following text was drafted in response to the first prompt in AN’s “Post-Pandemic Potentials” series. Two previous responses, by Mario Carpo and Phil Bernstein, reflected on the mostly seamless transition of architectural education from physical to virtual settings. Read more about the series here.

Michel Foucault’s famous account of the plague described the partitioning of the medieval city, the confinement of its citizens, and the accounting for and distribution of resources. Those foundational actions, according to his thesis, led to the disciplining of people and institutional bodies in space and time. Similarly, the field of medicine, consolidated by the Flexner Report of 1910 (and followed soon after by the founding of the Association of Collegiate Schools of Architecture, or ACSA, in 1912), was further formalized in the aftermath of the 1918 influenza outbreak that exposed the need for greater surveillance and diagnostics required in epidemiology.

Many of us suspect that we are in the midst of a similar reorganization of society. School directors like myself are now busier than ever, “pushing tin” as we remotely manage resources and people like air traffic controllers. Surveillance and diagnostics have been major tasks of the past several months, for better and for worse.

"Practices Must Remain Agile": Slack's Evelyn Lee on the Future of Working Together

While I agree with my former colleagues Mario and Phil that the current pandemic could trigger a paradigm shift, I am not wholly in agreement with their projections and concerns. Digital, web-based production is not necessarily more efficient, and even when it is, is conventional efficiency a desirable goal? To that end, I respectfully disagree with Mario that “digital manufacturing is nimbler, smarter, and more respectful of natural and human resources than the mechanical mass-production of standardized goods.” The limits are evident in the actual costs of production: Today’s global economy uses more natural resources than ever before. Moreover, digital technologies may have only transferred humanity’s burdens from one site of conscription and abuse to another—from the physical abuses endured in a West Virginia coal mine to the mental stresses of the Amazon distribution center or, say, from the production facilities of Manchester to present-day Ningbo. Pardon my gimlet-eyed Midwestern point of view, but things only look “respectful” from London or New Haven. And though Phil questions architecture’s predilection for better documents and accounts for the fragility of supply chains, based on current evidence, I question whether better-managed data can produce greater insight. That task is the pretext for our lean and mean on-demand economy, where corporate profits dictate the system’s easily “disruptable” and disreputable flows and flaws, and from which the university is obviously not immune.

But back to the question posed in the original prompt: What technological changes that were trending before lockdown was imposed might be accelerated? Work has been a hybrid of real and virtual interface for some time. To a lesser extent, the same has been true of the classroom (I am in agreement with Phil on this). Splitting work from the academy at an institution like the University of Cincinnati, with its 100-year-old coop program, is a Solomonic problem. The two sites of production are structurally entwined.

Whether following Foucault or not, faculty initially feared that we would be more closely surveilled, as happens in a pandemic. More to the point, we already were. For some time universities have been requiring that faculty and staff log hours using digital tools capable of monitoring students’ activity down to the minute. This imperative was driven by the same business practices that transformed the economy’s supply chains in the name of efficiency. As a result, there are more people at the university employed in management than faculty. Those executives and data managers were hired, ostensibly, to make education more efficient and accountable, but the quest for perfect data becomes job protectionism at great expense. So faculty worried that, if required to record our lectures and seminars, we would be cut loose and replaced by scabs in the guise of our virtual selves. The concern was a valid one, because real faculty are notoriously inefficient.

From the perspective of my students (and their parents), the stickier question was “Why are we paying so much for online education?” It is a question that is even more pronounced at more expensive private universities that often have better on-site lab facilities, with computers at every desk, and pay more for the physical presence of visiting, big-name, highly paid faculty, rather than at public institutions like the one I represent. But to be less of a public school booster (and putting aside my position as a director of an institution), I might assume the standpoint of a subversive faculty member and ask, “Do we actually need the university?”

The query leads us to more difficult, creative thinking. The Meds and Eds formula supports almost all economies outside of major urban centers. Classroom and workplace are entangled. On the other hand, we still think of universities as sacred spaces rooted in their historic precedent—the monastery with its cloisters and bells to prayer. The university is a site of production that relies on its physical aura and the steady seasonal beat of the academic calendar. We hold onto that image of privilege at our peril, for we are witnessing the breakdown of higher education’s cyclical rhythm.

Looking at the pandemic’s potential aftermath, then the first possibility for change is one of time. A few months into lockdown many found that the conventional academic calendar made less and less sense. We at the University of Cincinnati have known this for some time: From the beginning, the school was to run round the clock in a complex cycle of academic semesters and paid coops without the traditional break conceived as a seasonal return to work on the family farm. While we are working more now than before we went virtual in mid-March, perpetual work could shed its current burdens and transform into practices where the boundaries between learning and education and work and production are productively blurred.

The second opportunity is one of space. In recent years, two broader, conflicting tendencies have emerged that have analogies to the sites of traditional architectural production, i.e. the studio, the university, and the city. Work and play, the two poles of our contemporary lifestyles, have become one and the same. This was first noticeable within workplaces, which, despite being more productive than ever, shed their buttoned-up character for spaces of play, exchanging cubicles and dreary break rooms for lounges, coffee bars, and gyms. The urban downtown, too, transformed itself into the locus of the new service economy, and college and university campuses were quick to follow suit. Gyms, mini shopping malls, and well-appointed club rooms proliferate, taking up residence in the ubiquitous six-story brick boxes that once served as containers for factory, classroom, dorm, lab, and lecture hall. At Cincinnati, a ping pong table suddenly materialized in our thesis studio.

Traditional academic settings aimed at molding wayward youth into productive members of society, but today’s campuses, by contrast, are utopian spas for the cultivation and fulfillment of habits for the new, debt-leveraged aspirations of the next leisure class. Many have come to realize, however, that the debt incurred by students is also a burden on the institution. Nation-wide university investments in extended real estate portfolios, investment gambles on the market, and, for the very few, prospects of lucrative Division 1 sports broadcast revenues, are driving back-to-campus edicts, not the actual work of delivering an education.

Ever the former New England schoolmaster, when recently asked by an administrator if it would be OK for students to use the school’s lab facilities to “blow off steam” during the pandemic, I suggested that they find their entertainment elsewhere. At Cincinnati we take our play dead seriously; the campus is a place of real work and virtual production. However, human contact is necessary and desirable—collaborative work still operates best in the studio environment. The multiple factors that inform a problem need occasional representation at the worktable. And, I might add, that though we are housed in a College of Design, we disavow the label “design”, which implies the delivery of predictable outcomes, or the responsible charge of any profession. “Architecture”, by contrast, is neither design nor art; nor is it easily definable. Its indeterminate quality stems from its relation to the circumstantial. Yes, that is inefficient, but discoveries traditionally were the outcome of experiment and accident, not any predictive logic, design’s or otherwise. We require play to exceed conventional constraints and demand that mistakes be made. In that way we might move from possible/real scenarios that define standard practice to the virtual/real paradigms of discovery.

To quote from the Talking Heads chestnut “Life during Wartime” (read it as a pandemic prediction), I get asked “Why stay in college? Why go to night school?” and my reply continues to be, “Gonna be different this time.” Or, in what could be the start of a new tune, our students ask, “Why work?” and “For what future?” The dream of a virtual work environment or a more efficient work delivery system, I say, to goad my two friends and former colleagues, is not quite the point. In both those scenarios, the future remains the future of the past, where production is driven by the desire for more production and the cult of the new seduces society. We have learned that desire desires desire, and that we can no longer afford perpetuating the same damaging paradigms.

The coop model, as I say, was a radical idea of the 19th century. Even so, in these past few months, it has morphed into a wild, newly infected form at Cincinnati. Rather than the dualism real studio/virtual studio being debated, we are more likely to see a plethora of transgressions and hybrids, and, I hope, more mobile models for knowledge production. Yes, Mario, bakers and programmers, craft and computers, but also, as has been the case for a couple of decades, multiple work sites. Virtualities will emerge from the current studio/work model. Unconstrained by space, I can hire talent from anywhere and bring students into class from several time zones away. That is dangerous to the heavy investment in our physical campuses and, yes, the incredible campus here—more exotic menagerie than the world-renowned Cincinnati Zoo across the street—is worth the price of admissions to the school.

Being unconstrained by time might mean a new way of thinking about a sustainable and evolving model of work and education. But in our current educational models, we will have to break down the logistics and limitations of the so-called efficiencies that partition education and work, moving between knowledge and value generation. This just might be the time to break the proprietary constraints of the cloister toward a more open future for work and education. 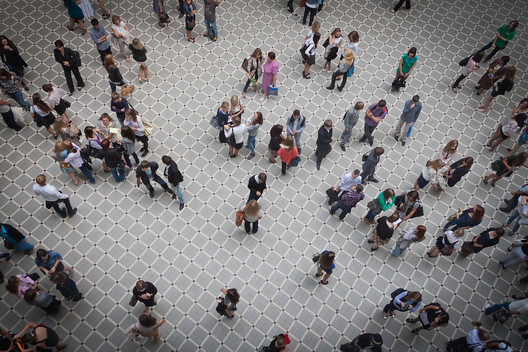