The CANactions youth competition was launched in 2009 by the Dessau Institute of Architecture (DIA / Germany) and CANactions School. The competition has become a professional "path to Europe" for Ukrainian students and young professionals. Since that time more than 1000 projects have been received, among which 118 finalist projects have been selected by members of the international jury. The Youth Competition is a two-stage open one that has no restrictions in the number of participants and is aimed at young Ukrainian architects under the age of 35. This year winner was Mariia Semibratova with an urban proposal for creative co-working and co-living in Podil area, Kyiv. 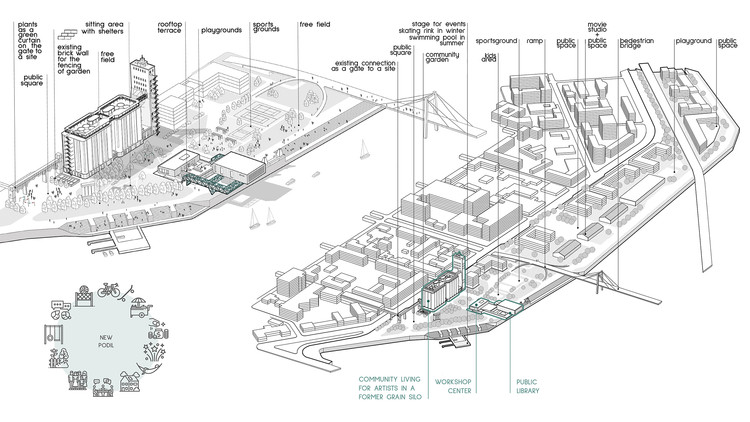 Reworking of Podil area in Kyiv. A design proposal for creative co-working and co-living.

Located in Kyiv, the capital of Ukraine, Podil area is a well known cultural district, combining the openness of public buildings, theatres and galleries with the closeness of housing blocks and former industrial site. The idea is to focus on one of this industrial areas which has a crucial advantage of being situated on the river side but appears to be closed and cut from pedestrians. The aim of the design is to find ways to integrate this neighbourhood into the energetic city life again.

The urban phase of the project illustrates the development of a strategy for “restarting” the place, opening it for pedestrians, giving the access to the riverside, creating new opportunities for work, affordable living, leisure, communication and sports, resulting in a mixed use area on the Dnipro river living 24/7.

Among all the suggested functions the focal point of the design was the integration of the community living facilities into this new emerging district. Somehow Kyiv is missing the typology of rental apartments, that’s why it was decided to test a cohabitation project in an existing silo building, turning the industrial landmark into a living space, preserving the history and the industrial character of the area as well as providing the city with new typology. For this purpose, silo blocks are transformed into offices and dwelling, sharing public and communal functions on the ground and upper floors. These two main functions divide the building in two parts: the first one facing the street includes offices added to the functional program to make the project economically attractive for investors, the second side opens itself to the park area on the river and accommodates the co-housing. The idea is to bring young people from numerous creative fields like arts, crafts, media, etc. under one roof, providing them with affordable living and opportunities for communication and collaboration. While these functions are more private and semi-private, it was essential to create opportunities for everyone to experience the building, and not only in the restaurant on the ground floor but also in the tower, that has a climbing hall, silo museum, spaces for rent, bar with an entrance to the rooftop terrace, etc. In that respect the existing character of the tower as a landmark reinforces with the fact that it becomes open for the public.

The new building above the waterfront should extend the principles of co-working and integration with public further along the area. It comprises workshops and ateliers for the community, allowing them to work together and to collaborate, but first and foremost to show the results of their work to the public and finally get out from the “underground”. The key point for that is an exhibition area catching people’s attention while walking along the river. The other function is a public library hanging above the water, which should become an eye-catching point for pedestrians which either coming from the river port or from the pedestrian bridge. It should become a shared space for studying, working and communication.

The two volumes are connected with a bridge structure that symbolizes an interactive transition, it also reminds the harbour cranes and preserves the industrial atmosphere of the site, simultaneously creating platforms an opening various views to the other side of the river, thus expanding the perception of space.

For the load-bearing walls of the library and co-working a timber stud system was chosen. That should become an example for Kyiv of how to build in a fast, sustainable and affordable way. 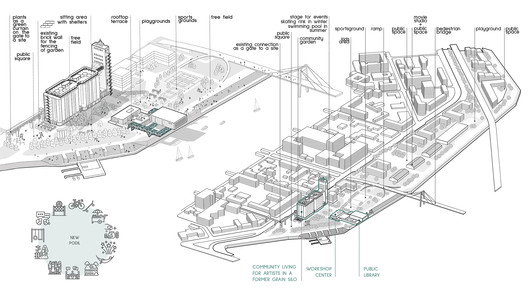