PILA, an architecture studio based in Athens and New York lead by Ilias Papageorgiou and Christina Papalexandri, was selected as the winner of an invited international competition, to regenerate the abandoned Piraeus Tower and redesign the famous building’s façade. In fact, this structure, the tallest on the port of Piraeus and the second-tallest in Greece, has never been entirely occupied. 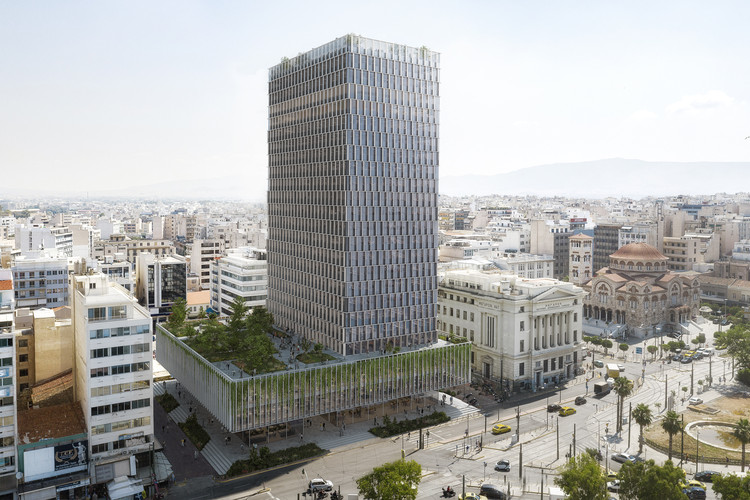 Originally designed by the architects I. Vikelas, G. Molfesis, and A. Loizou, and completed in 1975, the 84 meters building dominates the port of Piraeus. Never entirely inhabited, only on its first three floors, the existing structure called commonly “the sleeping giant” will be transformed into offices, retail spaces, and restaurants. Moreover, the façade will be uplifted to cater to contemporary needs.

As Piraeus is becoming a global transportation hub and one of the most exciting neighborhoods in the area, an intervention had to be done on the 44-year-old building. In collaboration with facade engineer Eckersley O’Callaghan, PILA planned to “transform the structure of the tower into a dynamic landmark that reflects the vibrant energy of the aspiring district”. Actually, the winning proposal introduces the abandoned structure into the daily life of the city. The strategy implemented also reduces the solar gain on the facade by 50%, resulting in a 20% reduction of the overall energy demand of the building. In addition, the project impacts different scales in the cityscape: a visual marker on the skyline, intriguing from up close, heartening from the sea.

The architecture office states that “the design mediates the scale of the city and that of the tower, offering welcoming exterior spaces and sharing breathtaking views. It also improves the appearance of the street, by introducing vegetation elements in a neighborhood with little green presence.” Generating pleasing working environments, the concept of the façade will contribute to the wellbeing of its occupants.

Regarding the approach of the façade, “a shading structure consisting of vertical and horizontal overhangs encloses the tower. Each vertical fin is horizontally displaced from one floor to the next, creating a spring pattern that wraps around the building”. The vertical fins rotate as they rise toward the top of the structure, optimizing the shading performance of the building, emphasizing the movement and dynamism of the facade as well as amplifying the panoramic views.