The KPF-Designed 601 West Pender Street was granted approval by the Vancouver City Council. Located next to the city’s historic Rogers Building, the project generates an urban oasis within the city, replacing a six-story parking structure in the Central Business District.

Bringing an interplay of light, reflection, and nature to the Vancouver skyline, while reinvigorating and enhancing public space at the ground plane, 601 West Pender Street joins the company’s long list of contextual, human scale, urban office buildings around the world.

Designed by Kohn Pedersen Fox (KPF) with Chris Dikeakos Architects as Architect of Record and developed by Reliance Properties, 601 West Pender Street, “puts in place a retail base covered by a planted pedestrian canopy, an enhanced Alley Oop laneway, and 29 floors of state-of-the-art workspace”. Scheduled for completion in 2025, the project engenders 16,000 square feet of amenity spaces across the tower’s two highest floors.

Inspired by the surrounding heritage buildings, KPF introduces a gridded façade that unifies the neighborhood and reinterprets major contextual datums found in the cornice of the neighboring Rogers Building. In fact, Marianne Kwok, KPF Design Director states that the firm “felt the best way to complete this block of heritage buildings was to create a building that was at once modern and timeless and accentuates its context with scale and color – while bringing nature into the urban fabric”.

On another hand, a fold in the building’s grid frame creates a woven appearance that plays with light to create depth. “While the glass in the main tower is flat, at the top and bottom the façade folds inwards to create pockets of green space, a wider public realm at the base, and views into retail and amenity spaces”. Moreover, the landscape designed by Enns Gauthier, activates “the streetscape, with additional landscaping added to the architectural canopy, ensuring greenery is experienced three-dimensionally”. 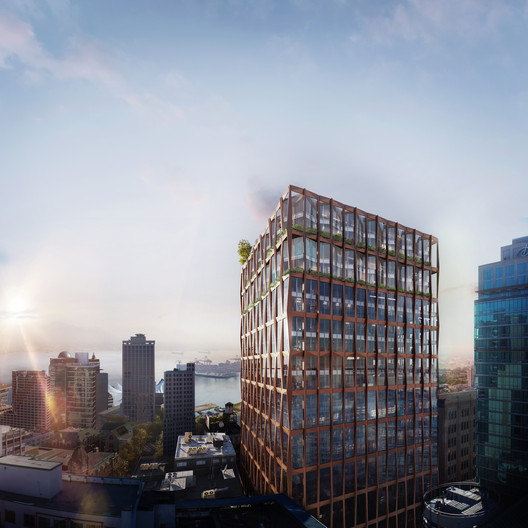