Save
Construction Begins on the Glass House Project, a New Take on Historical Preservation
Share
Or
Copy

Menokin Foundation has begun construction on its “Glass House Project”, a new initiative in the preservation of historic landmarks. Protecting what remains from the 1769 house, the intervention will replace missing walls, floors, and sections of the roof with glass. Designed by Machado Silvetti, in collaboration with glass engineer Eckersley O’Callaghan, and landscape designer Reed Hilderbrand, the project will be developed in phases, to be completed in 2023.

Menokin House, a national landmark of original colonial architecture, was the 1769 home of a signer of the Declaration of Independence, Francis Lightfoot Lee, and his wife Rebecca Tayloe Lee. Fallen into ruin in past decades the National Historic Landmark and stands on 500 acres of open agricultural fields, woodlands, and waterways in the rural Northern Neck of Virginia. One of the best documented 18th-century houses in the United States, the original architectural drawings of the house are still available making this type of preservation possible.

Until the Foundation acquired it, Menokin was the only home of a Virginia signer of the Declaration of Independence threatened by being lost to the ravages of time and the elements, […] The Foundation decided that it was imperative, not only to save what remained of the house but to develop an innovative way of connecting people to the span of history that the house embodies. -- Benjamin Ogle Tayloe, Jr, Menokin Board of Trustees President.

Awarded the “Best of Design Award for Unbuilt > On the Boards” by the Architect’s Newspaper in 2016, the project takes on a new type of restoration method, “emphasizing the deconstructed architectural elements of the building, revealing what is usually not seen: the work of restoration and conservation, the materials used, and the methods and craftsmanship involved in 18th-century construction”. In fact, upon completion in early 2023, visitors will be able to enter the house and physically explore both the remnants of the original building and the new spaces. Blending seamlessly with the original stone, brick, and timber, the glass structure will allow “to re-establish the overall configuration of the building, its footprint, and its functions”.

The glass structure […] will allow visitors to fully understand the original house, re-establish its overall configuration, its footprint, and its functions, and from both the outside and the comfort of the inside, highlight its relationships to the natural environment. At the same time, it will reveal, at close range, what is usually not seen: the work of restoration and conservation, the materials used, and the methods and craftsmanship involved in local construction. -- Jorge Silvetti, co-founding principal of Machado Silvetti. 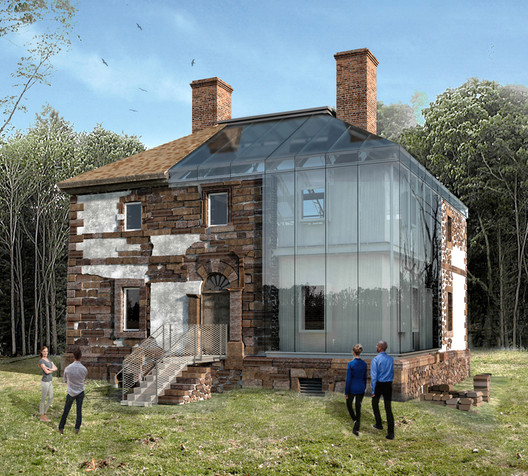