Save
Glamorous Glass Bricks Are Booming – Again
Share
Or
Copy

In 1977, a New York Times article by Carter B. Horsley proclaimed that “Glamorous Glass Bricks Are Booming:” once a “less than first-class” material, it was beginning to gain acceptance among architects in residential and restaurant projects for its translucence, privacy, visual interest, and sense of order. However, following the industry’s brief but widespread use of glass bricks, many now associate the material with outdated 80’s architectural styles, an aesthetic that few seem interested in reviving. Yet pioneering contemporary architects have begun using this unique material in new and distinctly modern ways, whether for sleek and minimalist bathrooms, industrial bars and restaurants, vintage residential windows, or even experimental urban facades. As Horsley stated, it appears that glamorous glass bricks are booming – again.

What Exactly Is Glass Brick?

Glass brick, or alternatively glass block, is a glass architectural element that admits light while maintaining visual privacy due to its translucent properties. The original patent for glass brick, filed in 1907, describes it as a process of fusing two sections of glass into a single block with a hollow center. This unique combination facilitates the material’s translucence and thus its properties of light-giving and privacy, as well its insulating qualities such as sound deadening, energy insulation, and fireproofing. These blocks can be any variety of sizes, but are usually at least two to three inches thick. During the manufacturing process, they can be altered in a variety of ways to achieve different aesthetic effects or levels of transparency, including by varying the texture or color of the blocks, creating different shapes such as hexagons, or curving the blocks as part of a predetermined design. Similarly, glazes or inserts may be added to each block, or patterns can be pressed either into the interior space or outer surface while it is cooling.

Typically, a glass brick wall or window is composed of an array of these identical glass blocks. They are relatively easily assembled and can be fixed together with several different methods, the most common being to use Portland cement-based mortar, with reinforcing rods of steel. In Europe, glass bricks are manufactured according to the European Standard EN1052-2, while the International Standard is ISO TC 160/SG1. These standards classify glass bricks into three rating categories based on the quality of the manufacture.

The History of Glass Brick

The history of glass brick is complex, with variations of the material far preceding its 1907 patent. For centuries, ships used what are called deck prisms to provide natural sunlight below decks. These consisted of glass prisms placed into the deck that refracted and dispersed natural light into the space below without weakening the planks, remedying the issue that artificial lights such as candles and kerosene lamps were immense fire hazards for wooden ships.

Following this precedent, in the early to mid-1800s, some cities began to incorporate sidewalk prisms into the pavement, letting sunlight into vaulted spaces below, such as basements or other subterranean spaces. Famously, the now mostly demolished original Penn Station set sidewalk prisms, then called vault lights, into its concourse floor, allowing the light from its soaring glass and steel roof to reach the tracks below.

Finally, in the late nineteenth century, Gustave Falconnier patented the first hollow glass block, called Falconnier Hollow Glass Bricks. Unlike the modern glass brick, which is manufactured by combining two glass pieces, the Falconnier Bricks were hollow only where the glass was blown, making it less strong and durable. These bricks were primarily used for greenhouse construction and as infill material for buildings.

Nonetheless, these three precedents were all instrumental to the creation of the modern glass block in the early 20th century. Deriving its translucent effect and light-giving function from deck and sidewalk prisms, and its architectural applications from the Falconnier Bricks, the glass block was by no means an isolated invention but simply a development of existing glass prism innovations.

As the glass block continued to be refined and perfected in the early 20th century, pioneering architects increasingly used this new material. Bruno Taut’s Glass Pavilion at the 1914 Werkbund Exhibition boasted glass brick walls. So did the famous Maison de Verre, designed in 1928 by architects Pierre Chareau and Bernard Bijvoet. Later, built for the 1933 Chicago Century of Progress Exhibition, the Owens-Illinois Glass Block Building included a 50-foot-tall tower of colored glass blocks. To many at the time, glass blocks symbolized a kind of utopian vision for the architectural future. While this novelty may have largely worn off nearly a century later, the properties of glass bricks that initially gripped architects – its manipulation of light, maintenance of privacy, and strength and durability – remain just as useful today.

Today, architects continue to use glass brick for a variety of reasons – one being, of course, its aesthetic value. With its unique look and ability to diffuse light, glass brick walls and windows are not only aesthetic statements unto themselves but can improve the lighting and ambiance of an entire space. Because of these generalizable advantages, glass bricks can also be used for a wide range of programs, from residential houses to commercial structures. One stunning example of a commercial building using glass bricks is UUfie’s Ports 1961 Shanghai Façade, made entirely of glass blocks and conferring a bold, contemporary edge to the literally glowing flagship store. Similarly, whereas the original Penn Station is now lying in ruins, Max Dudler’s Wilhelm-leuschner-Platz station, built only in 2012, features glass brick walls and ceilings to bring natural light into the underground concourse. More modestly, Ferrolan LAB’s Family House in Barcelona includes large glass brick windows that both light the interior and form an unconventional residential façade.

For many homeowners, glass block windows are beneficial for curb appeal – they can make homes appear more upscale. Even relatively dull rooms can be transformed by a glass brick statement wall or window to appear more dramatic and well-designed. Especially if they are custom designed to match the design of the rest of the home, glass blocks can generate enormous aesthetic appeal.

Privacy is another huge benefit of glass brick windows. They can be installed in garages and basements or other places where valuables are stored without showing passersby what items are being held. Of course, they are also often installed in bathrooms to bring in natural light without compromising the privacy of the homeowner. Whereas regular windows include blinds or curtains for privacy, these require more maintenance and adjustment. Blinds and curtains require users to prioritize either light or privacy – glass brick facilitates both simultaneously.

Another advantage of glass brick windows are their security, as they are much more difficult to break into than regular windows. This benefit nicely coincides with their use in rooms containing valuables. Moreover, glass block windows are highly waterproof due to their material composition, making them great investments for areas prone to flooding.

Finally, glass blocks are extremely energy efficient. Their hollow centers not only generate thermal insulation values that are similar to double-pane windows, but the mortar that holds each block together performs an even better job of blocking air infiltration than traditional window frames. They therefore save energy not only by diffusing natural light and reducing the need for artificial lighting, but by being airtight and thus reducing drafts or heat transfer. Some glass block windows even use low emissivity glass, further reducing the amount of heat that can enter through the glass. However, even standard glass block windows usually meet ENERGY STAR guidelines.

Glass blocks come from a long history of prism lighting and utopian architecture, and they or their precedents adorned some of the most beloved or influential buildings of the early 20th century, from Penn Station to Bruno Taut’s Glass Pavilion. Today, architects are again beginning to explore the aesthetic and material properties of this unique architectural element, pushing toward new boundaries of glass and light in architectural design. 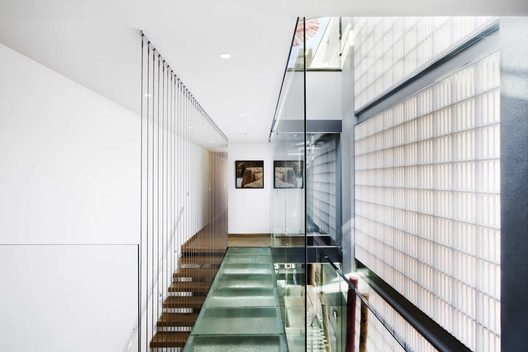