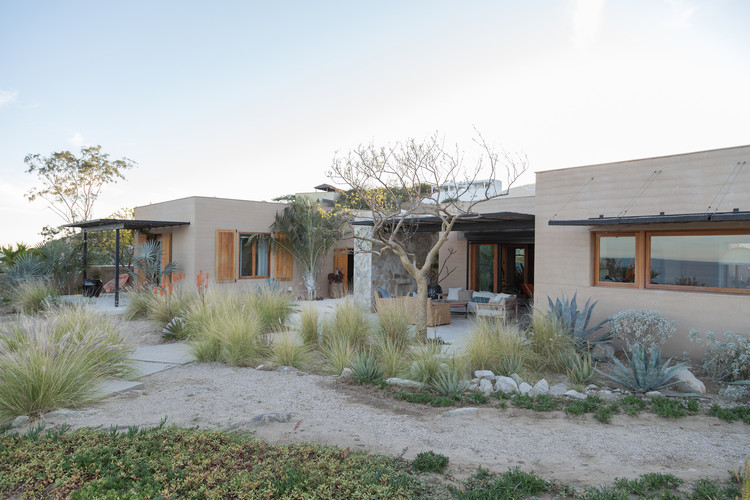 Text description provided by the architects. The house is located in a hilltop of the East Cape (Laguna Hills), 9km away from the nearest infrastructure network (San Jose del Cabo) in an off the grid community.  The horizontal profile of the building along with the rammed earth walls, blends the house into the landscape, very discrete from the dirt road that comes along the sea.

In the East side, three different rammed earth volumes interact with each other creating common outdoor areas. The walkway leads the visitor to the amazing Mar the Cortez view and distributes the areas. On the left side, two physically connected volumes receive the main common areas. The living room, covered with a tile vaulted roof, opens the space to the exterior lounge and to the kitchen through big rammed earth arch. The wide kitchen opens itself to the panoramic view on the East side and to a small patio that brings in the outdoor nature to the house.

On the right wing of the house a wooden walkway generates the access and separates the 2 master bedrooms. In the center, 2 bathrooms are connected to an open small patio with an outdoor shower and a hot tub. These patios are also defined by local stone walls and create a particular atmosphere.

Other three structures share the same property: the main garage; the rammed earth guests house; a small meditation vaulted room on the South, almost invisible between the trees; and the owner’s art studio on the North East.

The materiality is simplified in two main techniques: Rammed Earth and traditional local stone masonry. Modern and traditional materials dialog in a harmonious way, bringing local architecture to the contemporary scene.  Thick earth walls have many advantages in an arid climate as its thermal mass allows temperature regulation between day and night; in winter the walls will hold the heat in and during summer cool it off, keeping the interior areas with a comfort temperature during all year long. The openness of the house also promotes cross ventilation. All the project was design according to the passive solar design principles.

Elements like wood on windows and doors are made with sustainable sources and treated naturally. A special Japanese technique was used on the exterior bathrooms walls, where the wood is burned until the surface is charred, and then coated with natural oil. (Shou sugi ban)  Along with the elegant horizontal lines of the walls, details like lattices and pergolas creates shadows and transparencies, playing with the beautiful natural light of Los Cabos. These special features elevate the aesthetics of a house that’s classic on its configuration (patio, proportions) and contemporary lines.

The volumes seem to be with the nature all along. Landscape merge within the architecture. Natural desert plants where punctually planted inside the patios and in the surrounding outdoor common spaces as we keep a Xeriscape style, that avoids the use of supplementary irrigation. Due to the location of the property, the conditions allowed the project to have an independence from the grid with a solar system that provides enough power to sustain the house. A water treatment plant was also incorporated to reuse the water on the irrigation system when needed.