The City of Montreal had launched a national, multidisciplinary landscape architecture contest, in order to generate an innovative scheme to reinstate natural habitats in the city. A team of four firms, civiliti, LAND Italia, Table Architecture, and Biodiversité Conseil, have won the competition, by creating a corridor that will enable the transition from a mostly asphalted, fragmented territory to a diversified urban landscape, connected to all living beings. 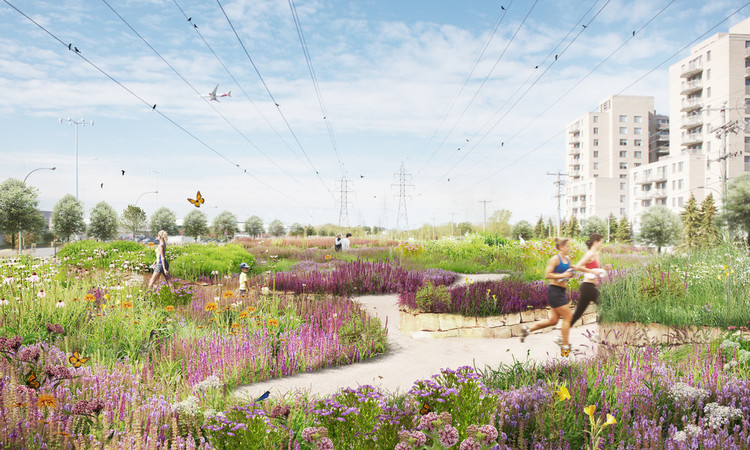 Montreal’s new Biodiversity Corridor project was first unveiled last November, in Wuhan, China during the 5th Design Biennale. The visionary plan consists of reintegrating wildlife and natural habitats in the 42.8-square-kilometer urban territory of St-Laurent, 70% of which is now a sea of asphalt occupied by industrial and commercial activities. Used also as a major corridor for high-voltage power lines, the borough was left with no tree cover and ground vegetation, including former agricultural lands.

The winning project, to be implemented over the next 20 years, transforms a narrow strip of wasteland located under the overhead power lines along three main boulevards, converting the sterile lawns into flowering meadows that will attract birds, pollinating insects, and small animals. “The plan also includes new pedestrian trails and upgraded bicycle paths, as well as activity or rest areas for the enjoyment of St-Laurent workers and residents”.

Moreover, different types of interventions will “help reconnect existing and future green spaces, eventually creating a continuous corridor allowing animals, insects, and vegetation to regain their lost habitat”. The project will provide the residents and workers of St-Laurent with a special space to discover nature in the heart of an urban environment.

The future corridor will enable us to transition from a landscape that has been greatly modified by human beings, losing its biodiversity and resilience, to an abundant and diversified urban nature, connected and linked to human beings. -- Alan DeSousa, Mayor of the Borough of St-Laurent, particularly affected by Montréal’s fast-paced, car-oriented growth of the ‘60s and ‘70s.

In 2020, the Biodiversity Corridor Master Plan received a Special Jury Award for the category “Sustainable Development” in the latest edition of the National Urban Design Awards. One of the top distinctions in Canada, the award is organized jointly by the Royal Architectural Institute of Canada (RAIC), the Canadian Institute of Planners (CIP), and the Canadian Society of Landscape Architects (CSLA).