JOA is honoured to participate in the 2019 Bi-City Biennale of Urbanism\Architecture (Shenzhen). We have always taken the research led perspective as the starting point of the design, trying to discuss the story behind the architecture in greater depth, and present it to the public through the exhibition. Our understanding of the future world is more based on the perspective of architecture rather than sci-fi movies. The premise of envisioning the future is actually to discuss the current social pain points, and then come up with critical reflections in a future dimension, which we call "The Post Anthropocene” project.

In 2002, Nobel Prize-winning chemist Paul Crutzen published an article in Nature, for the first time officially proposed the concept of "Anthropocene", referring to the recent geological epoch of the Earth. The Anthropocene is considered dating from the commencement of significant human impact on Earth's geology and ecosystems, including, but not limited to, anthropogenic climate change, by the end of the 18th century.

Based on the topic "Anthropocene" and research on striking environmental and social problems, we create a series of architectural types that can predict the future society. If we continue raging on our planet, the natural reaction force will push us to adjust, which results in new architecture types. And in this project, we introduce five typical new architecture types that can be predicted accordingly to five different cities. We studied the complex forms of five cities in different dilemmas, translated this complexity into the architectural composition, expressing through narratives of movie and illustration. Behind architectural form, the new type reflects a more accurate response strategy, local customs, different mottos of living, and spatial qualities.

New York Ark: In 2012, Hurricane Sandy landed on the south coast of New York, causing approximately $19 billion in damage. The global warming issue will raise the world‘s water level by 52 to 98 cm in 2100. If this continues, Manhattan will be immersed in the flood not before long, and the life of New Yorkers will be severely affected. Hypothetically, We propose a floating ark for this. The ark has a green core and expands outwards, accommodating residents by their original class order. In between the residential area and the "central park" is public spaces, including cultural place and office provided for spiritual consumption on the upper level, as well as facilities on the lower level to maintain the ark's fundamental consumption, including vegetable plantation, slaughterhouse, incineration and power plant. The ark also shows a hidden relation between different classes.

Beijing Smog Free Tower: The smog issue in Beijing has become a global concern. The reasons include lack of water resources, the city's location in the wind outlets of Inner Mongolia Plateau, annual sandstorms, low forest coverage, industrial pollution (mainly coal ash), and urban pollution (mainly automobile exhaust). The smog above Beijing is mainly composed of sulfur dioxide, nitrogen oxides and respirable particulate matter. The Smog Free Tower will sequentially filter atmospheric particulate matter, degrade sulfur element, electrolyse rainwater, recycle nitrogen element (to fertiliser), and go through other physical or chemical treatment processes, finally produce oxygen via photosynthesis. The PV cells on the surface of the device provide basic energy, and the hydrogen produced by the electrolytic procedure will be used for suspension of the tower. There is also a tour arranged for the public, combining panorama deck, botanic garden and education.

Amsterdam Sin City: The famous red-light district and cannabis shop (Coffeeshop) make Amsterdam one of the world's capitals of pleasure. After 2000, the red-light district began to be officially legalised and became an important cultural landmark. However, considering the problems of congestion, there are government proposals suggest to demolish and transform the red-light district into a commercial street. In the meantime, the legalisation of cannabis also involves a lot of grey areas such as private cultivation and import business. Sin City brings together different consumer places in Amsterdam and standardises them with management, floating on canals and receiving tourists from all over the world with an independent and open attitude. A new consumption mode has been introduced, similar to traditional shopping malls, but not limited to physical materials. There is a red-light district, cannabis cultivation and sales area, a sex-free celestial bath, a live show theatre, and an unlimited self-service market.

Manila Garbage-Recycling Furniture Factory: Manila produces 6,700 tons of municipal waste every day, most of which is transported to the Quezon City garbage collection area. The government incinerates some of the garbage, causing pollution to the urban air. According to estimated data, 150,000 residents live near disposal stations and make a living by recycling garbage. Manila has to face this issue in the near future. The Garbage-Recycling Furniture Factory can systematically classify household waste and construction waste according to whether they are recyclable or not. The recyclable waste is processed in the reuse factory to make environmentally-friendly furniture, and then displayed in the roof-top garden sales. The non-recyclable waste will be filtered, processed, completely combusted, and after filtering out harmful substances, the remaining exhaust gas is discharged into the atmosphere.

Reykjavik Data Centre: Iceland's unique geographic location makes it a hub connecting Europe, America, and even Asia, which can be an excellent location for a data centre. In addition, after the financial crisis, green energy and technology will become the main supporting factors for Iceland's future development. The ideal data centre can be powered by geothermal electricity. The air with an average low temperature here can be used for cooling via ventilation. The excess heat from computers can support a botanic warm house. The data centre is operating based on a set of energy and ecological self-circulation systems. 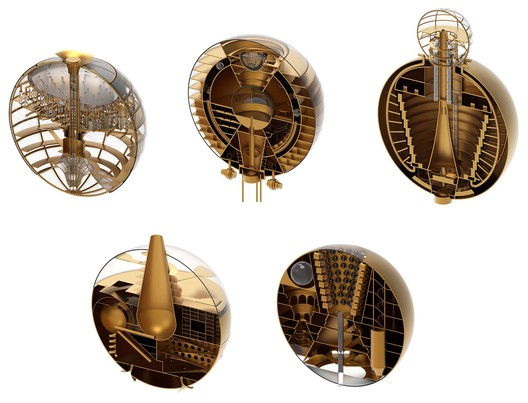