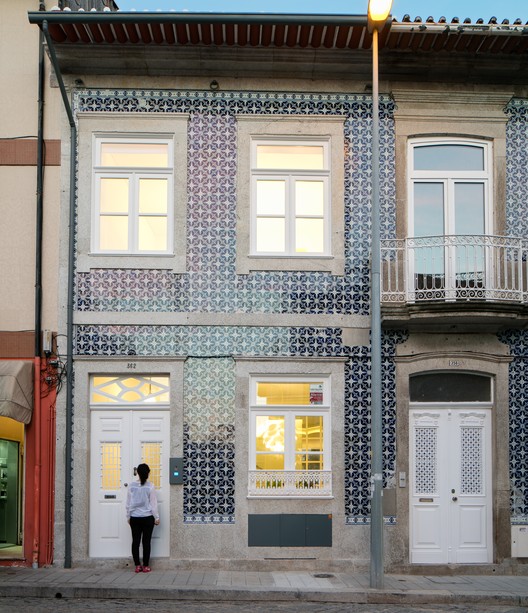 Text description provided by the architects. The objective was to rehabilitate the Casa do Pinheiro Manso, typical of the XIX century bourgeois Porto, built on a long, narrow lot, with two fronts and a back garden, retaining the original features of the house and providing it with large and bright spaces, more adjusted to the owners’ desire.

The ground floor, in a very poor state of conservation, and with a direct relationship with the garden that was intended to enhance, has suffered a major transformation in terms of constructive elements and spatial organization, yet maintaining the social function. On this floor a distinctly contemporary language was assumed through the creation of wider spaces with full-height doors and panels. In particular, in the separation between the kitchen and the living room, a door was built with iron and glass, amplifying the passage of light between spaces, and making their relationship more fluid.

In the two upper floors, which received the bedrooms and a more private living-room, the intervention included the rehabilitation of the majority of the existing constructive elements such as carpentries, doors, etc. A modern character was given to the new bathrooms, ensuring their adaptation to the current use requirements.

The main facade, part of a set of 2 houses built simultaneously, was rehabilitated. On the back facade, which had already been the target of a change in the mid XX century, the windows and doors were increased to ensure a wider connection with the garden: in the main living room, located on the ground floor, by installing a set of harmonic-type doors with about 3.0m high, allowing, particularly in warmer months, the merge between the garden and the room; in the most private living-room, located on the first floor, through the installation of a large window, allowing the usufruct of the view to the garden.

The combination between the rehabilitation of the existing constructive elements with the materialization of more spacious and modern spaces allowed to fulfill the main objectives of the intervention: respect the architectural and heritage value of the building, taking advantage of it; choose solutions that would enable an experience in accordance with the current comfort standards, concern from the beginning manifested by the owners.