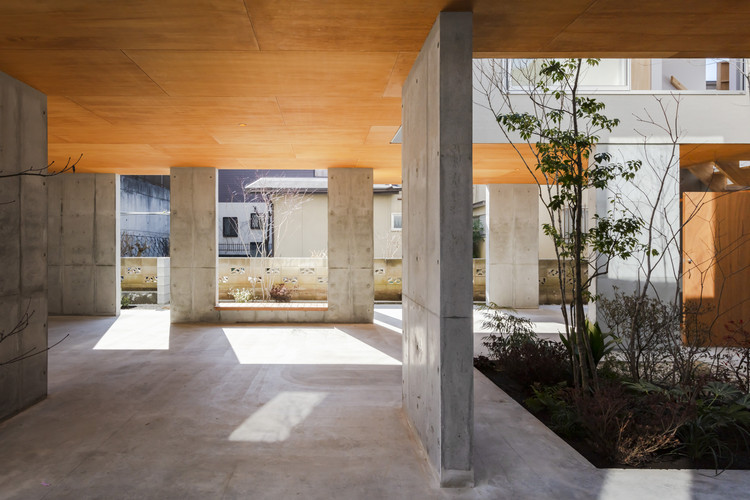 Text description provided by the architects. The site is an artificial construction site, has 3m retaining wall in two directions in the north and east, and has a block ridge on the south. The RC wall are erected on the flat ground and the wooden house rides on that. It is also due to the fact that the “building method” in the surrounding area separates the parking space and the living area up and down by artificial ground.

In addition, the first floor piloti space is consolidated with solid foundation, and there are small yards in some places, creating spaces for lunch, exercise, and regional opening. In other words, it is de-signed as a pure "acquired" stilt house that adapts the volume to an artificially construction site that is not an earth-derived site such as a wetland or slope that is the origin of the stilt house.

The stilt type is excellent in insect proof, moisture proof and crime prevention. And in this site, the texture of the retaining wall and block ridges, which are often treated as negative images, is incorporated into the artificial piloti space, and the site is used as widely as possible. And because the living area on the second floor has a plan that surrounds the light garden, not only it enhances daylighting and natural ventilation efficiency, but we can also get in touch with the first floor softly. Because of acquired stilt house, it is possible to create a semi-public first floor that spreads throughout the site and a private second floor with many windows that take in landscapes, and have appropriate distance to the city. 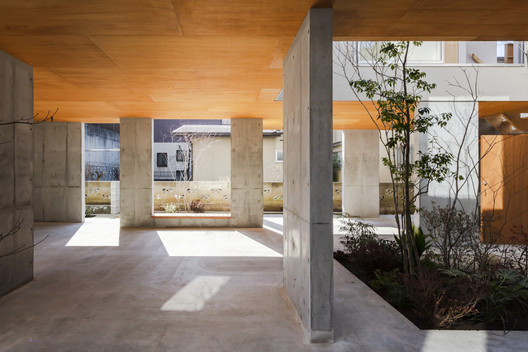