Marshall Blecher & Studio Fokstrot have introduced “wilderness and whimsy”, to the Danish capital by creating a series of floating islands in the city’s harbor. Adding a new archetype to the urban space, the project can be used by boaters, fishermen, kayakers, stargazers, and swimmers.

Entitled Copenhagen islands, the project is a not for profit initiative started by Australian architect Marshall Blecher and Danish Design studio Fokstrot. In 2018, the first island prototype introduced to the harbor became super popular. In fact, CPH-Ø1 hosted photography exhibitions, a series of talks and many seaside picnics. Scheduled for 2020, three more islands to be launched, with plans for more in the near future.

The “parkipelago” of islands puts in place a whimsical and playful floating green space with “endemic plants, trees and grasses above and anchor points below providing a habitat for birds and insects, seaweeds, fish and mollusks”.  Adding a new purpose to the rapidly gentrifying harbor, the constantly changing project will be built by hand using tradi­tional wooden boat building techniques in the boatbuilding yards.

Easily movable, the islands will be transported seasonally between underutilized and newly devel­oped parts of the harbor, “catalyzing life and activity”. Moreover, the newly introduced generous green oasis “hints at a new type of climate-resilient urbanism, inherently flexible in its use and only using sustainably sourced and recycled materials”.

Awarded the Taipei international design awards for public space and the award for social design, Copenhagen Islands was also a finalist in the Beazley design prize at the London Design Museum and has just been announced as a finalist in the Danish Design Prize. 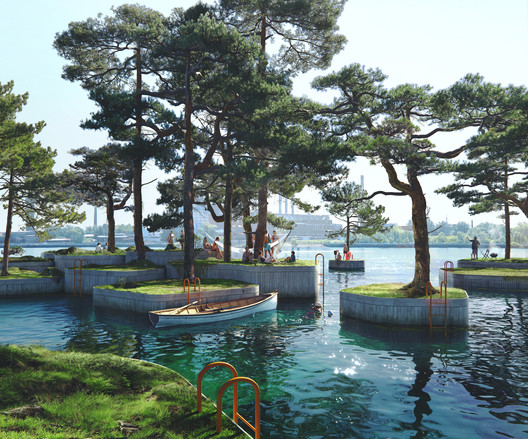