A new film by Steven Holl Architects and Spirit of Space showcases the REACH at the Kennedy Center for the Performing Arts. Designed as three pavilions interconnected below an open green roof, the elegant expansion merges architecture and landscape to increase the center's interior space with 72,000 sf of open studios, rehearsal and performance spaces, and dedicated arts learning spaces.

As the team explains, the REACH was made as both an active performing arts center and a living landscape embedded with a narrative reflection on the life of President Kennedy. The public is invited to meander through the open landscape at all times of day. It provides both large and intimate spaces to gather, and as well as gardens that offer opportunities for performances and events. A unique component of the design is the Simulcast Lawn, where performances inside the original building are projected onto The REACH’s largest pavilion for free outdoor viewing. 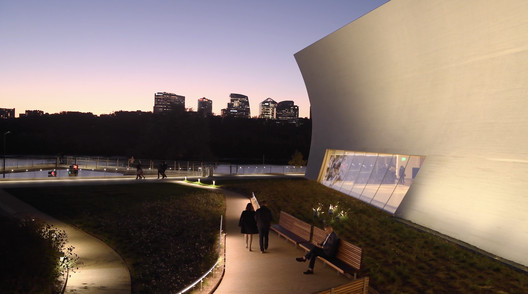