Adelaide-based practice Intro Architecture has designed a sweeping tower for the Oscar Seppeltsfield hotel in the Barossa Valley of Australia. Rising twelve stories with around 70 rooms, the hotel's shape was derived from the art of barrel-making, particularly the process of the curvature and manipulation of the stave. The tower was formed to seemingly grow from the vineyard, with its "staves" emerging then twisting to create the curving form.

The design team set out to understand and capture what makes Seppeltsfield Wines and the wider Barossa Region a unique location in South Australia. As they explain, the design philosophy was born watching craftsmen wield their tools as they contort and convex each timber stave into a barrel shape. The team hope to create a highly expressive and contemporary design that sits within it organic setting. Intro states that, "without the stave, there is no Barrel and without Oscar Seppelt, and now Warren Randall to continue his legacy, there is no Seppeltsfield. These two influencers have taken the prevailing village and augmented such for the benefit of theirs and the next generation."

The hotel's conceptual framework of the deconstructed wine barrel is expressed through contrasting materials and transparencies throughout the series of contorted staves. Programmatically, the design will include a day space, boardroom and restaurant, as well as a sky bar on the top level. Currently, no update on the planning application or timeline has been announced. 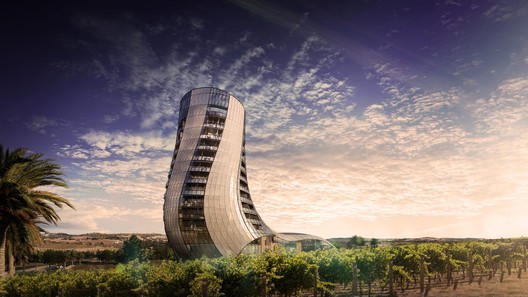