The new architecture of Belarus responds to an interplay of history and culture. Regional forces have defined the built environment and its evolution, and in turn, shaped the lives of the Belarusian people. Since the landlocked country attained its independence in 1991, it has had the most development in its cities, where two thirds of the population live. Over the last ten years, a range of new buildings have begun to paint a picture of its emerging design culture. 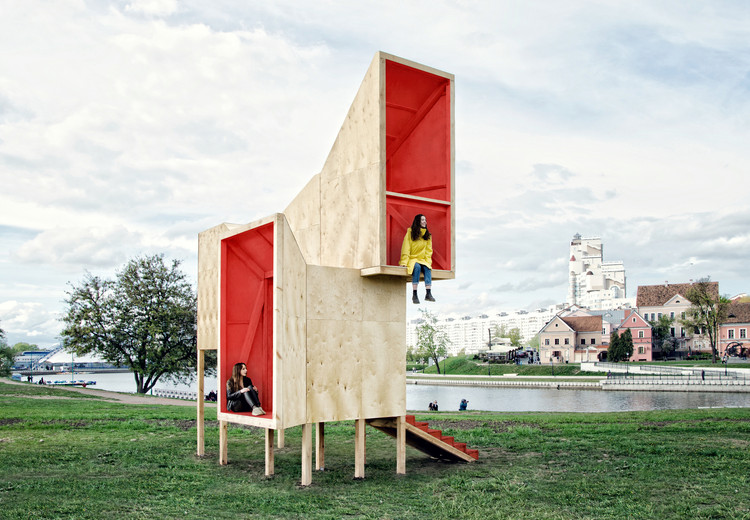 Over time, the structures and buildings of Belarus have largely been a reflection of the local geography and building materials. As the country is mostly forests, marshland and urban centers, the are also many examples of historic architecture. From castles and churches that date back to the Middle Ages, more recent work is usually juxtaposed next to traditional materials, forms and building techniques. While contemporary and modern buildings may be harder to find, these designs have taken the shape of pop-up pavilions, offices, museums and homes. The following projects represent a few of these projects that are being built in Belarus.

An old forester’s house in the Berezinsky Reserve in Belarus became the basis of this museum. As the team explains, the picture of a lonely house in the forest was their desired image for the museum. During the reconstruction, the team hid all the windows around the house so that it was not clear from outside what is inside the building. This is a reference to the fact that few people know about the pre-Christian era today.

Office for Stark Games by Studio11

This interiors project for a new Stark Games office space emerged as an experiment in terms of color and composition solutions. At the stage of design, the team created a concept that incorporates around 8 different colors, 7 various materials and a diverse composition of circles and ellipses. The combination of all these ingredients created the central concept and idea for the office space.

House A by Igor Petrenko

House A is located near the border of Minsk. The main objective was to create a comfortable and functional home for one family. The house had to be designed without unnecessary decoration with the use of "clean" natural and beautifully-aging materials, such as wood, concrete, glass. Later, the owner of the house has formulated the title of this style as "functional minimalism".

Let it be by ZROBYM architects

ZROBYM designed the character of this interior to be modest, restrained, and almost completely filled with custom solutions. All the furniture was made to order. Gypsum panels in the hall and vestibule were also made to order. A small story came out with lamps, and they made another main light in the hall. Tile on the floor of the factory VIVES was selected, further adding to the desire to create an interior that would become a pleasant background for guests.

The interior of Vizor company is a reinterpretation of Soviet design and architecture of the 70s and 80s, with the public attention on the aesthetic value of this trend. In general the interior is filled with light and clear space extending and flowing from one volume to another. The floor was designed in the same material and the red ceiling are the main elements shaping the interior.

The FRAME pavilion was designed to recognize everyday beauty. The path inside takes visitors into four different directions, where through the openings, it frames different scenes and events. Thanks to an open-form layout, structure invites passerby into a dialogue with the pavilion and its environment. As a part of Minsk Design Week 2019, it was painted with ‘Living Coral’ – Pantone’s colour of the year.