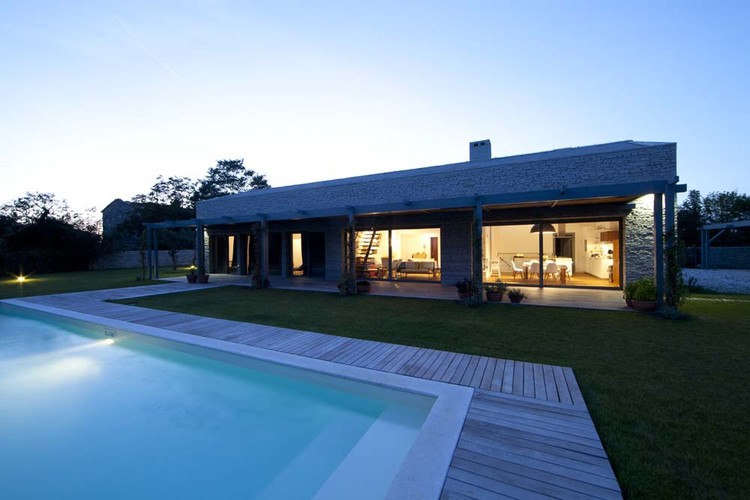 Text description provided by the architects. While working on this project the main question that was raised was how to integrate a contemporary facility into the existing ambient of a small Istrian town, how to incorporate something modern into the existing area, which in itself entails a string of details and functions that considerably vary from the rural image of surrounding households, all the while striving to keep the balance with the community in general.

The investors’ request (two friends) was that two identical country retreats be situated on the lot with a joint swimming pool and accompanying details. During the designing process local structures and materials were researched in detail, particularly the way in which the materials (primarily stone) were used, shaped and experienced. The path led from traditional Istrian Casitas to family estates. The Casita as the most primitive structural form, but with a clear and well-defined outline (wall, opening, roof) and fascinating stacked-stone structure alongside the family estate as a group of separate facilities which function as a whole.

It was attempted to unite these concepts so as to create not only new structures in space, but for the purpose of those new facilities complementing the situation and environment without disturbing tradition or unnecessarily imposing themselves.

The abovementioned contemplations resulted in a house that follows the clear and simple contours of the neighboring facilities (rectangular ground-plan, angled roof), which with its three-way restrictedness quite clearly defines the completely open fourth side. Furthermore, with its stone-lined facade and roof it directly communicates with the location it is situated in a subtle, but expressively individual manner.

The dialogue between the old and the new is established by the entirety of the two houses and the supporting storeroom as a perfect counterpart to the neighboring family estates that encompass several facilities within their property, and by shaping, structure and texture at the same time clearly separate the private from the public, allowing the creation of an intimate contemporary ambient.