OMA and partner Reinier de Graaf, together with Jaspers-Eyers Architects, have won the competition to design the new headquarters of Belgium's National Railway Company in Brussels. The design preserves three monumental buildings in the Brussels-South train station along Fonsny Avenue. At 75,000 square meters, the headquarters project brings all departments under the same roof with work space for 4,000 employees.

OMA’s design will add an eleven story, 236-meter long new volume facing the rail tracks. As the team explains, the interaction between the existing buildings, inaugurated on the occasion of the 1958 Brussels World’s Fair, and the addition is an expression of Brussels’ double nature. “It embraces the Belgian Brussels, with its early, and often courageous expressions of modern architecture, and the European Brussels, for which the European railway and the Brussels-South stand as symbols,” says Reinier de Graaf. The SNCB office space also includes conference and training rooms, a fitness center, a restaurant, and rooftop gardens on the existing buildings.

The design will feature a three-story entrance lobby at street level, with retail spaces and visible access points to the rail tracks, in line with the municipality’s strategy to inject new life into the neighborhood. On the side of the rail tracks, the façade reveals the diversity of activities within the new building – a move to convey the openness and transparency of the organization to the public it serves. OMA’s design is part of the preferred bid submitted by the consortium BESIX Group, BPC/BPI and Immobel. The competition was organized by SNCB. The new headquarters of SNCB NMBS is OMA’s first large scale project in Belgium. The project was led by partner Reinier de Graaf together with associate and project architect Mark Veldman. 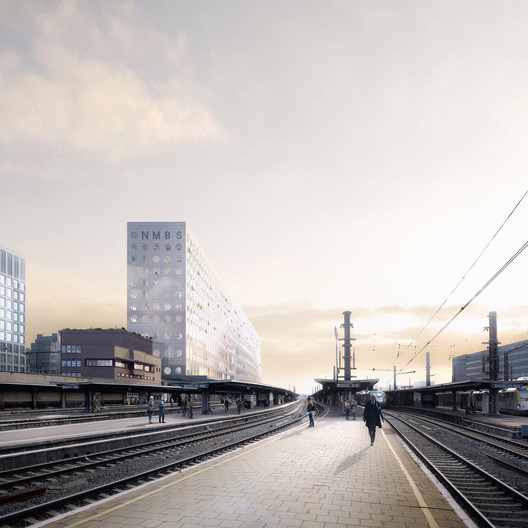