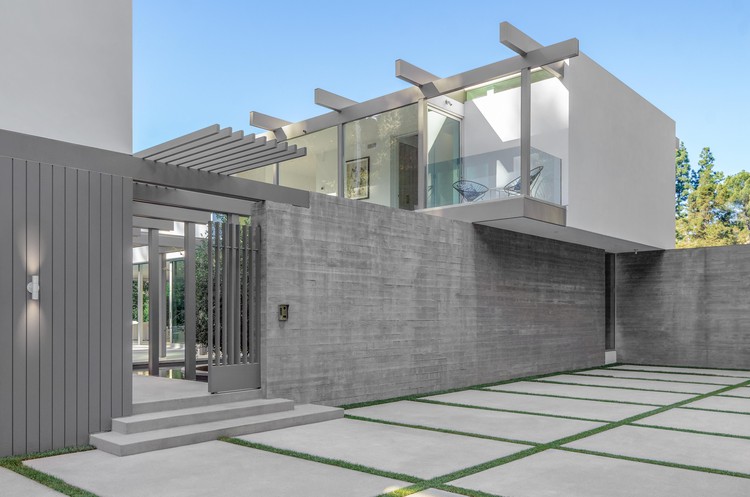 Text description provided by the architects. This project was developed on a flag shaped hillside lot in the Bel Air neighborhood of Los Angeles. The orientation of the site is within a canyon where the sun rises from above a steep hill behind the flat building pad. The favorable views from this lot are on the opposite side of the suns path, looking downhill towards the neighborhood canyon. The design challenge was to orient the building towards the view, while allowing sunlight to illuminate the core of the building from the opposite direction. In addition, the local municipality has an overlay zoning regulation which limits the use of skylights and prohibits single level flat roofs, requiring an additional secondary flat roof which must cover at least 30% of the total roof area.

The design solution we introduced was a roofed beam system, which has a major upper roof attached to the top of the beams, while the secondary lower roof system is attached to the bottom of the beams. The residual space between the upper and lower roofs became clearstory windows which bring sunlight into the spaces at the core of the building. While large glazing elements at the opposite side of the living spaces frame the canyon views. The structural rhythm of the exposed beams is reminiscent of California midcentury modern architecture. We chose to embrace the resulting midcentury notion and develop a contemporary variation of a midcentury home. The procession to this home begins at the long driveway leading up to a motor court. We introduced a hidden garage door with channel shiplap wood siding, which became the cladding material of the accessory structure on the ground floor. The long board form poured in place concrete retaining wall creates a boundary for the flat pad against the hillside. The proportions of the retaining wall boards have the same corresponding board pattern as the shiplap siding of the accessory structure. The concrete is formed horizontally while the shiplap wood siding is oriented vertically.

Continuing from the motor court into the entry courtyard, the procession to the front door resumes with a pond on one side, with a native oak tree in the center, and the shiplap clad accessory structure on the opposite side. Past the entry courtyard, the interior ground floor opens up to the yard, with a major sliding glazing element connecting the interior and exterior spaces. This creates an expansive and privacy protected indoor / outdoor living space, which is a fundamental aspect of the regional mid-century concept and its typological character.