Save
In Vienna, A "Shapeless and Brutal" Celebration of Raw Architecture
Share
Or
Copy

As the world of construction becomes more automated, driven by economy, speed, and bureaucracy, architect and professor Marc Leschelier has created an exhibition at the Architektur Im Magazin Vienna, Austria, which inverts this trend. Titled “Cold Cream” the exhibition creates a secluded space, dissociated from the world, where the practice of construction is reduced to the struggle between soft and hard matters as well as spontaneous rises. The exhibition is therefore not an act of architecture, but rather approaching a form of pre-architecture. 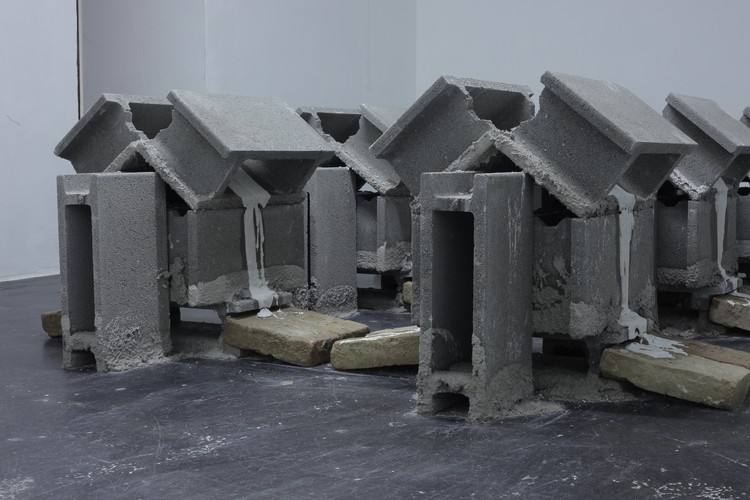 In the exhibition, the visitor is guided through several rooms containing architectural elements made of cement blocks bound, stitched and dipped into mortar. The relationship between the raw material and binding agent becomes no longer an ordered constructive act, but an excessive matter, unshaped with plastic properties of its own.

The first room shows a skeletal column construction where the raw elements are rearranged to form a new architectural body. The cement blocks rest on their side, placed obliquely to bear their own weight, while conducting light and revealing the mortar that has been dropped into their interstices. The construction of the column is direct, representing the idea of an architectural system based upon spontaneity.

The next room displays a piece for conducting the liquid matter with which the architecture is made, in this case, plaster. This machine is itself made of cement blocks, dividing and distributing the matter without having recourse to re-form it. By releasing the matter, the expression is direct, developing the theme of the exhibition.

In the last room, these soft and hard elements are reformed as pieces of walls. These direct constructions are carried out in a room that turns its back to the world, where a spontaneous construction takes place, without rules, restoring “the violent act of building”. The excess of matter and the lack of rationality of these constructions reconstruct links between architectural and non-architectural disciplines.

The Cold Cream exhibition is part of Leschelier’s extensive body of work that refutes construction as a rational enterprise, but instead imagines it as a process simply made up of accumulations of raw matter, shapeless and brutal. He there seeks to capture a state of the constructive process that exists before it becomes a finished object, abandoning architectural formalism in favor of a more raw and intelligible reality of architecture. Leschelier’s work is built using three different mediums - models (reduced model), performances (physical experience) and prototypes (1:1 scale realizations). The link between these works and these different scales is the constructive gesture, each time direct and without modification.

A cycle of works entitled: Worksite I, II and III began this research at the level of physical experience by conducting worksites as performances, without interruptions, and without preliminary drawings. These performances have made it possible to produce chaotic and spontaneous fragments of architecture, with the aim of one day becoming the alphabet of a complete building. Other works such as Building/Prototype I and II are constructions that focus more on the articulations between the elements than on the elements themselves. The crudeness of language is intensified by the enhancement of articulations: chains, concrete reinforcing bars, superpositions, and accumulations.

The Cold Cream exhibition will run until February 29th, 2020 at the Architektur Im Magazin Vienna, Austria