Australian practice ARM Architecture has begun redevelopment of the iconic Sydney Opera House's concert hall. The two-year renovation aims to better equip it for performances, enhance its acoustics, improve accessibility and create a safer working environment. Part of the biggest upgrade to the building since it opened in 1973, the project will include a new acoustic ceiling, new automated drapes, and a 3D surround-sound system for amplified performances. 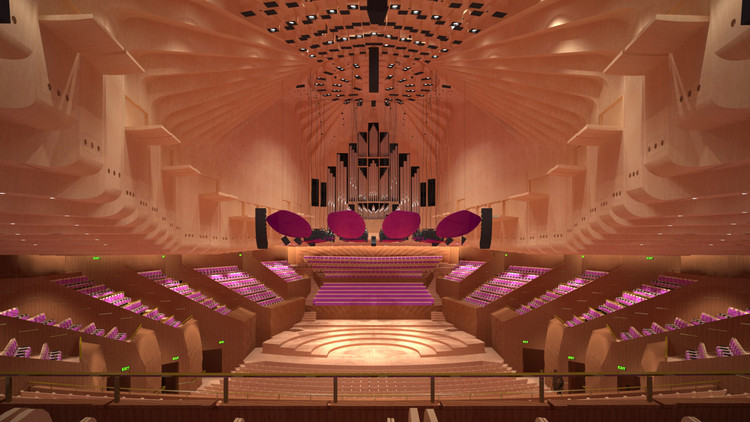 Working with Schuler Shook and Müller-BBM, the ARM team will focus on the concert hall's acoustics. At the same time, the stage will be lowered to improve sight-lines. Today, the concert hall has a capacity of 2,679. The venue's acoustics have been a longstanding issue, and Mϋller-BBM received feedback from the Opera House's orchestras and choirs. The project will include above-stage reflectors, as well as a new flying rig, a new accessible lift and automated stage risers.

The concert hall upgrade is part of a 10-year renewal plan that began in 2013 on its 40th anniversary, leading up to its golden jubilee in 2023. The design will be built by Taylor Construction and Waagner-Biro Stage Systems, and the larger team includes specialist theater consultants Theatreplan UK with Arup Engineers, Steensen Varming and Design5. Teams are working with the Sydney Symphony Orchestra, Sydney Philharmonia Choirs and Australian Chamber Orchestra.

The Sydney Opera House's concert hall refurbishment will be complete in 2022.