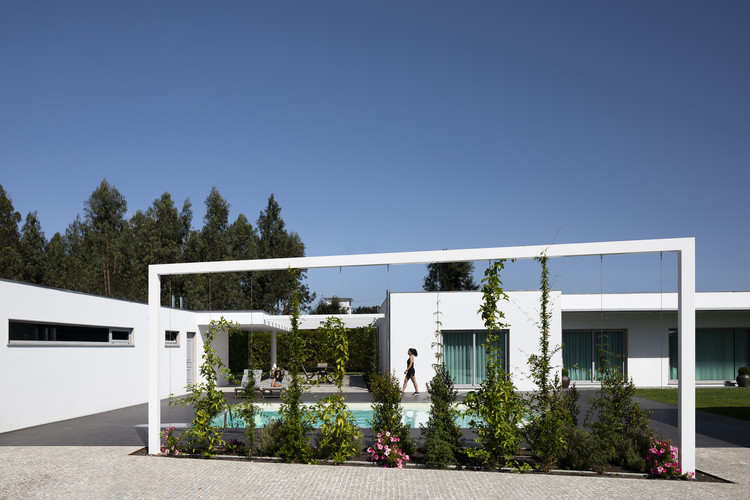 Text description provided by the architects. This project intends to refurbish a single-family house, severely affected by pathologies resulting from defective construction options. In addition of trying to correct the existing pathologies, we also intend to rectify the dysfunctions of spatial organization. Besides, the ambition of the project is to rehabilitate the dwelling to give it new habitability conditions, and to ensure that it becomes more versatile and with better construction details.

The ground where it is positioned admits two distinct zones, an urban one confronted with the main street, and where the house is implanted, and the remaining rural area of forest use, where it is foreseen an implantation of a space of leisure with a padel field and garden areas. This new space is the continuity of the planned expansion for the annex, which will be closed with glass and become a lounge for events, available for socializing between friends and family.

At the annex facade it is proposed the construction of a metal structure in pergola form that connects to the dwelling. That affects the drawing of the implantation of the edified, changing it into a J shape that will give name to the project. This pergola will create the proper protection to the annex, allowing its use to be extended to the outside. The use of metal structures is replicated together with a vertical plane, which is proposed to one side of the pool in order to create a barrier with its vegetation. This will limitate and protect the pool area from the indiscreet views of the neighbors. These are the only changes foreseen for the exterior facades of the house, since all the rest will not be modified by respect for the set designed by another colleague and, above all for being in good state of conservation. In this way, the most significant interventions reside in the interiors.

Of these, it is worth mentioning the reduction of the number of rooms, from 4 to 3, where all them become suites. The two new suites are composed by a wardrobe area that transits to the sanitary installation in a natural and contiguous way, through a glass wall that unifies the two spaces. The main suite undergoes an extension of the dressing room and sanitary installation, acquiring a new jacuzzi area, and a private outdoor patio which will guarantee the adequate ventilation and illumination of that space without losing the privacy required for it.

Last but not least, it is proposed to unify the living room and kitchen by knocking down the concrete wall that separates them, so that they become one only, an open space capable of bringing the family together, often separated by this physical condition. Here we also intend to open a door in the north façade, guaranteeing a new entry point from the backyard since this entrance was made through the kitchen.

Nevertheless, all these alterations will not be sufficient for the intended rehabilitation without first correcting the existing constructive pathologies, especially the infiltrations of water. This issue will require the creation of a rainwater filtering system creating drains in the perimeter of the dwelling, especially in areas where there is a greater amount of water.

It will also be guaranteed the proper waterproofing of floors and walls, in order to avoid the existent capillary action. After all the anti-infiltration treatment, all the finishing materials are replaced or intervened in order to completely renovate this villa, as if it were a new one. 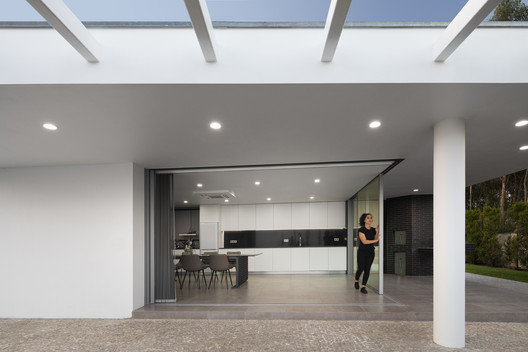