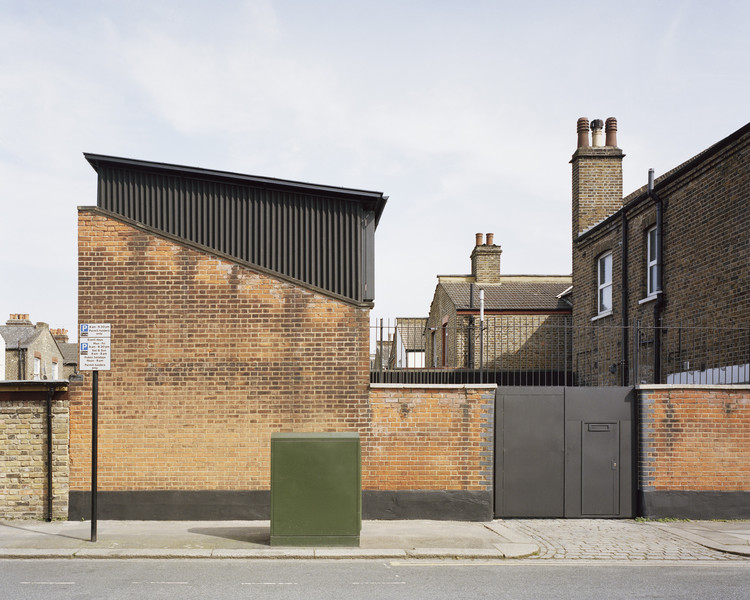 Text description provided by the architects. This project for a new two-bedroom house is located on Windsor Road in Tottenham, North London. The site is set within a diverse residential neighbourhood made up of long terraced streets lined with two-storey Victorian and Edwardian houses.

The client, a small-scale private developer purchased the site in June 2017. The brief called for an existing storage building and yard to be converted for residential use without compromising the adjacent property. Given local real estate values and the small footprint, maximising building envelope within a limited budget was critical. The project achieved planning permission in 2018 and was completed in April 2019.

The 70 m2 site is located behind a former Victorian beer retailer on the corner of Dowsett and Windsor Road. The single-storey brick outbuilding was originally used to store beer barrels and also acted as stables. In later years it became a workshop independent of the adjacent two-storey corner building.

The 60 m2 house sits within the brick walls of the outbuilding. Using the existing foundations, the new two-storey, timber-framed building rises above the retained brick envelope. Whilst the new form loosely follows the profile of the Victorian predecessor, the choice of new materials allows the existing building to remain clearly legible but still an integral part of the project.

The house is accessed directly from Windsor Road, via an existing cobbled entrance and retained black steel gates. The relationship between the yard and building has been maintained and the 40 m2 exterior space now forms the entrance and private courtyard for the new house.

In following the footprint of the existing building, the house naturally orientates itself south towards the yard. At ground floor, full width glazed sliding doors link and extend the open plan living, dining and kitchen space to the private courtyard. The stairs, WC, storage and laundry are organised along the rear ground wall to maximise open living space towards the south aspect.

At first floor, two bedrooms and a bathroom share natural light from clerestory windows to the north. A continuous ribbon of fully openable windows along the south provides bedrooms with natural light and ventilation, while angled timber louvres create privacy and prevent overlooking from neighbouring properties.

The site presents an atypical urban condition that the design seeks to embrace. There is a distinction between the new building and the existing brick structure, and a contrast between the expression of outside and in. The new external walls and roof are clad in corrugated cellulose sheets, dipped in bitumen. The matt black exterior palette, corrugated sheets, thin roofline and simple detail nod to the site’s original heritage.

Internally, exposed structural pine sections used for the floor and roof structure run north-south towards the courtyard. All soffits, internal walls, cabinetry and doors were fabricated on site using sheets of birch ply. Hand turned timber doorknobs introduce a level of delicacy within the straightforward construction. The white oil washed ply surfaces create a gentler interior atmosphere in contrast to the exterior.

The project was designed to be built using readily available, off-the- shelf materials that could be sourced from local timber yards and builders’ merchants. A small-scale local contractor was appointed to carry out all works and this sole responsibility encouraged a level of care and concern for economy, whilst maintaining consistency in the quality of craftsmanship. With the exception of the fenestration, all building elements were fabricated on site using the existing yard as a workshop.

In addition to Windsor Road, Russell Jones is currently working with the same client on a number of similar backland projects in London, exploring the potential for such sites whilst endeavouring to make a positive architectural and sustainable contribution to London’s growing housing stock.