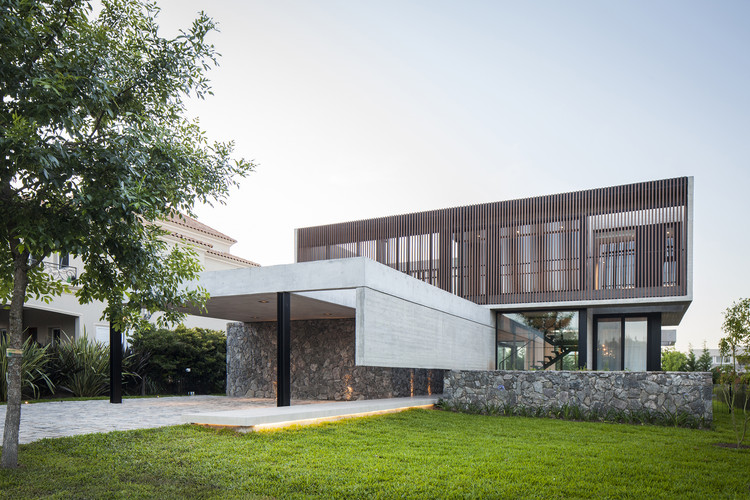 Text description provided by the architects. Sukkha House was built in a gated community located in the northern region of Buenos Aires. The volume of the building consists of two pieces that depict the formal simplicity of the design. There is the intention of discovering the house’s own voice, based on the use of bright volumes that rest one on top of the other. Pure forms with the possibility of being slid without meeting anything but total emptiness, creating habitable spaces. The planes and volumes appear without any openings or interruptions. Instead, some of their sides dematerialize and merge with big virtual surfaces and large glazed panels, thus preserving the continuity of slabs and walls to create envelopes. The main volume of the upper floor rests on top of another on the ground level, which generates an empty space for the area of the social use of the house.

The functions of the building are organized around a central axis that begins with the introduction of the access, characterized by a series of elements that soothe the transition between the outside and the inside of the house. At the front, we meet a slab with a rectangular opening that invites us to look at the sky on the way to the door and, by doing so suggests the presence of the upper floor volume. At the same time, a suspended concrete partition accompanies the experience and prepares us to enter the house by giving a glimpse of the surrounding vegetation. The whole time, the designed sunscreen visually limits the patio and enlarges the upper level. The shading screen not only constitutes but also unifies the front and rear façades, thus consolidating a volume that reflects a strong architectural concept. The program was developed around the four indoor and semi-open patios, which organize the spaces as well. These uncovered areas lengthen the visuals, gather light, provide cross ventilation and offer the possibility of incorporating the green spaces and landscape into the most intimate parts of the house.

The exposed concrete plays a decisive role and shapes the main envelope of the building. As regards the slabs that support the structure, plain formwork was used to achieve an even finish and to highlight the horizontal planes. For the upper floor, formwork made up of 3’’ wooden planks was used to provide an uneven finish as a result of the different shades marked by the pattern of the material. The palette offers warmth and movement to the obsessive straight lines that shape the house. The concrete elements always rest on top of either crushed stone volumes of light wide flange beams that connect the different parts while providing an ethereal air. This effect of weightlessness is stressed by the big eaves and cantilevers. The presence of the wood contributes to the feelings of lightness and warmth. The wooden elements provide transparencies and spatial insinuations inside a cubic and precise volume as if implying an intended contradiction. The combination of materials and the continuity of vertical and horizontal elements enhance the dematerialization of boundaries. At all times, the indoor floorings become part of the outdoor patios and the internal ceilings expand and merge with the outdoor spaces in the shape of big eaves, thus giving a sense of continuity that prevails. 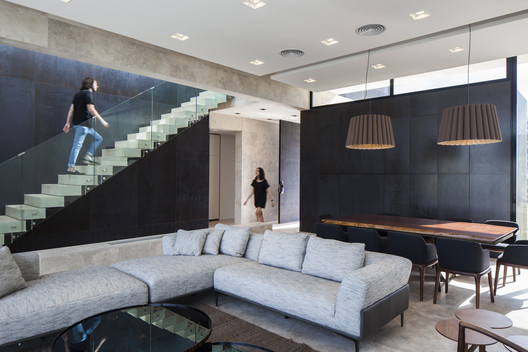