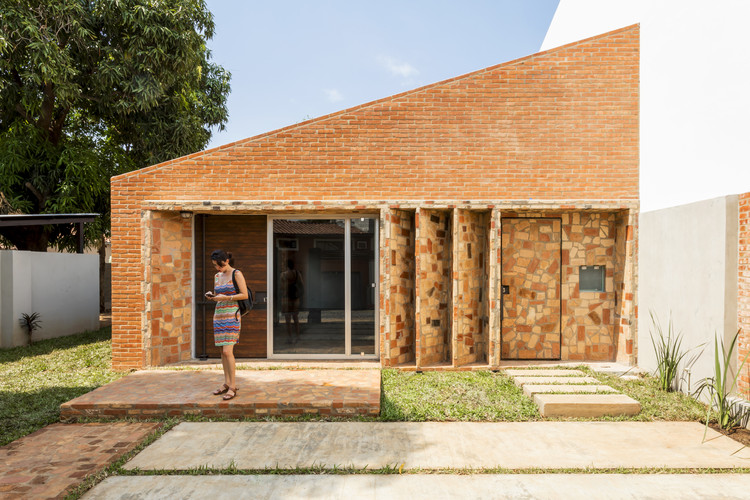 Text description provided by the architects. This small project is located in a residential neighbourhood in Asunción of low density and relative tranquillity, where the owner commissioned us to renovate an old house of almost vernacular characteristics and in quite deteriorated conditions, for profitable purposes. Therefore, our efforts were focused on developing a discreet project that would find a way to recycle the house, allowing it some flexibility in the spaces while fitting into a somewhat tight budget. The initial situation presented us with an unfunctional fragmented typology of clogged and annexed spaces, a lack of ventilation and natural lighting, walls without foundations and with noticeable humidity, considerable structural fissures and other anecdotal surprises, such as the presence of a cesspit in one of the rooms.

All these factors required us to rethink a large part of the initial project during the construction process itself, as is customary ... We initially planned to minimize demolitions, adapting the new project to what already existed, incorporating a large living room - dining room, one more bedroom and a more defined service area. But while the work was being carried out, the hidden pathologies and vices of this precarious house became increasingly present, to a point where we were forced to demolish more than 70% of the construction, reusing in some cases only the foundations. All this resulted in a large pile of rubble of various materials that, quite the opposite of being considered garbage, became the protagonists of the change.

Reduce, reuse, recycle (along with even some more R's that have been incorporated into the repertoire of the contemporary world) declare the motto that led us to use the techniques that our experts have been using in paradigmatic works of our prominent Paraguayan architecture. Rebuilding from rubble has become the alternative that allows us to explore, through a circular economy of compensation (spending more on labour, but avoiding the buying of raw materials), new and interesting ways to generate comfortable, attractive spaces that are equally functional, with new textures and configurations that are given by the condition of the material itself.

The Fuelle Roga House, formally alludes to the accordion-like artefact that serves to oxygenate and stoke the home fire. A fire translated into new spaces from a crease of ceramic rubble of different compositions, in continuous elements and in interrupted elements, to generate interactions between the house and its courtyard along its entire facade, while allowing an interesting play of light and shadow, as well as the desired natural ventilation. This simple but complex experience at the same time reaffirms the responsible commitment that we must have as agents of change in our current consumer society, optimizing resources creatively and avoiding energy wastes and unnecessary cost in the context of our actions.