Tonkin Zulaikha Greer have redesigned a historic hat factory in Sydney’s Surry Hills to become a new hotel. The design transforms the handsome Henderson Hat manufacturing warehouse building to act as a catalyst for connecting and reactivating the surrounding public domain. The hotel would add two additional levels to the existing six-story Edwardian building. 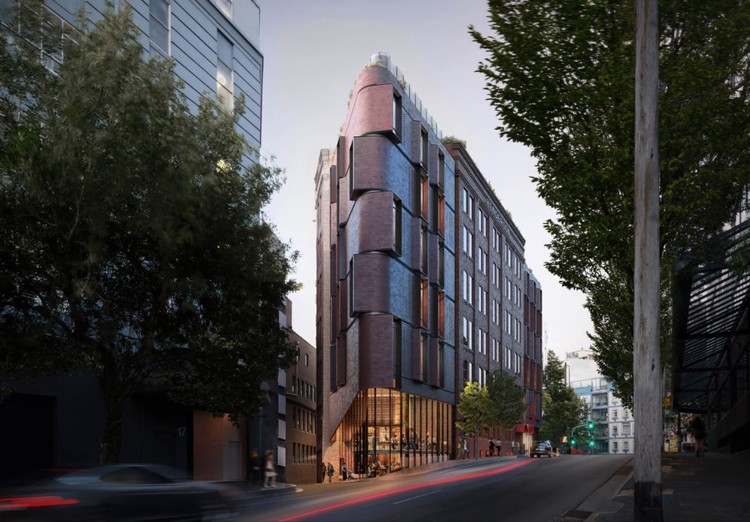 Located in a bustling urban environment, noise and privacy has been carefully considered in the design of the hotel. Guests are protected by means of room orientation, window location, furniture layout, and at the most exposed face of the building, a cladded screen was created. The design would join 11-13 Randle Street with infill buildings on the two lots. Designed by architect Thomas Pollard Sampson, the R.C. Henderson hat factory produced women’s headware and was built in 1912. The hotel would include 770 square meters of commercial space and 123 hotel rooms.

As the team states, "In contemplating a hotel at the periphery of Sydney’s bustling Central Station, an understanding of the complex workings and interfaces of Central Station is essential. Once the Metro is completed there will be a dramatic increase in the number of pedestrians accessing the new Metro Station Portal on Chambers Street via Randle Lane, adjacent to the new hotel. The intensity of this anticipated pedestrian activity presents both opportunities and constraints, and has been integral to the conceptual design of the new hotel."