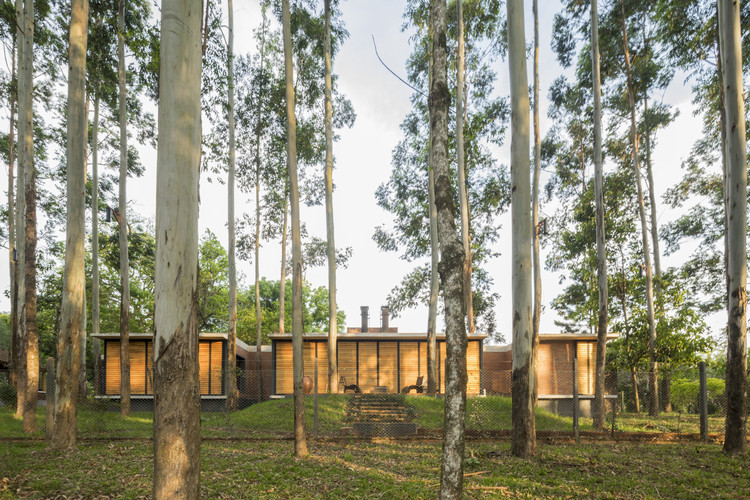 Text description provided by the architects. A construction made mostly with local resources in a reforestation land, a corner at the suburban area in Obligado city, with one of its sides on a vehicular street and another one on a projected street that works as a pedestrian cross zone next to a lagoon that reflects the landscape, where the house is located as a horizontal contrast to the vertical trees that fade the sunlight, and reveal the coming wind.

A wall made of basaltic stone, organizes 3 principal volumes, it also holds the slab and divides the main spaces and the serving ones, it organizes and hosts the functions. Built in a dry stone has required a huge effort to cut off the stones, in order to let the stones left overs being re-used to build the paved street, and the useless cutting discs were also re-used to build the main entrance door, getting ride of all kind of waste.

Due to the proximity between trees of the forest plantation, 7 eucalyptus trees had to be cut down, but they returned to the site as shutters, doors and furniture made in a carpentry 200m from the work place, making the impact mitigated by taking full advantage of the wood, discarding them from structural uses.

Water captured on the roofs is driven by the channel; which is the crowning of the stone wall, towards the ends of the house where it is filtered by decanters and fulfilling  2 large cistern walls of 1300 liters each, for use in the irrigation of the garden, service faucets and toilets.

The air and the air conditioning system of the main space, which in this case is the dining room, has its own alternative bioclimatic air conditioner system (Canadian well) that has an exterior outlet and a 35-meter linear serpentine under the room.

The fire also finds its place in the great stone wall, organizing and nucleating the area by locating it adjacently to the house, the grill and the kitchen.

Although the stone wall does a lot, or almost everything in the composition of the house (Form, Space, Function, Technology), the richness of it is in the atmosphere in the place, through the passing hours and the light; that gets in and out, as well as in the night shadows that the produced by moon in the spot occupied by the house.