All
Projects
Products
Events
Competitions
Save
“The Goal Is to Create an Immortal Building”: In Conversation with Boris Bernaskoni
Share
Or
Copy

Bernaskoni founded his namesake bureau in 2000, the year he has graduated from the Moscow Architectural Institute, MArchI. His first major break came with the Perm Museum XXI international competition, in which he shared the first and second prizes with Valerio Olgiati, while Zaha Hadid took the third Prize. The competition that failed to produce a building was judged by such heavyweights as Peter Zumpthor and Arata Isozaki. It attracted the likes of Coop Himmelb(l)au, Hans Hollein, Asymptote, Eric Owen Moss, and late Vito Acconci, among others. Bernaskoni completed widely published projects Matrex and Hypercube, both in Moscow, and Yeltsin Presidential Center in Yekaterinburg. He has won a number of international and national competitions, including for his Hypercube building, selected as a Finalist in the Architizer A+ Awards in the Architecture +Technology category. Bernaskoni has exhibited at 2008, 2012, and 2016 Venice Architecture Biennales, published several books, and lectured internationally. I caught up with the architect in New York for the following interview to discuss his work and to contemplate on what will be the role of the future architects.

Vladimir Belogolovsky: You said once, “I try to redirect all of my projects from material zone to the immaterial one. Although this architecture is made of ordinary materials, my architecture is conceived as a sign, as a message transmitted through media.” What is the message of your work?

Boris Bernaskoni: Architecture is all about function. But for me, it is more than that. A form is defined by various forces – social, political, economic, artistic, experimental, and so on. A form is a shell, a vessel, in which all these forces communicate. What is a building’s message? Today it may not be communicated on its surface, like classical orders on historical facades. Instead, the message is in the building’s essence. I would compare a modern building to a computer’s motherboard with chips responsible for numerous functions. This is how I see my architecture in a nutshell. Transformation, hybridization, and hyper functionality – are the three notions that I always explore in my architecture.

VB: What key goals do you pursue in your work?

BB: I am always after innovations. Most importantly, architecture must have its mission. Architecture is not self-sufficient. Its mission is in creating a horizon for people. Architecture should elevate people above its function by giving them a new perspective, open new possibilities, and not just spatial. In other words, to provide comfort and be functional – that’s just the most basic objective that any building must deliver. Architecture begins when a building sets on a mission. In other words, to achieve architecture, a building must rise beyond its function. I see my mission in being able to perceive the existing forces at a particular place, redirect them, and turn them into a new, relevant form. Architecture is defined by its place.

VB: You don’t think that the idea of an architect, as an artist, is still relevant?

BB: That’s the architect’s role – to manifest oneself, as an artist, to cut everything extraneous, like Michelangelo, and leave everything that’s essential to the place, function, and the time that we live in. A good architect must be able to achieve that at the highest technical and artistic level. A building is not just a sculpture, but also a structure that must function well and be profitable. The goal is to create an immortal building, a kind of building that would be able to transform from a caterpillar into a butterfly, retaining its essence but metamorphosing into something entirely new over time, depending on the future challenges. The ability of a building to be able to transform into something new is one of the most vital functions of architecture in the future.

VB: You once said, “Architecture is not frozen music. Quite the opposite, it is an acutely sensitive device. Not stone, but interface that transforms through its reaction to the user and environment. For example, there is a need for some projects to last for three years and then transform into something else. Then you change its skin, its components, and the building would acquire a new function.” Why do you insist that such total transformation is relevant to architecture? Isn’t architecture about reflecting on its own time, as opposed to changing with it?

BB: I am talking about architecture that is able to transform itself. Architecture’s biggest commodity is its ability to transform. It is the transformation that enables buildings to be immortal and remain relevant. Ideally, a building would become a certain interface, while its facades, interiors, or functions could change according to new technologies and demands. Buildings should be such that would allow changing old goals for new ones and effortlessly. Look at the buildings in Times Square, how fundamentally they have changed over the years, and they continue to change. Architects must try to predict the future and create buildings that could adapt without participation of the author. In other words, time itself will be the author, not the architect. I don’t think that a well-designed building would be possible to spoil over time. My Hypercube in Skolkovo, Moscow is such a building. The building’s facades were designed by algorithms, I did not design them. This is algorithmic architecture designed based on big data and AI modeling. For example, it is AI that will decide on what side of the building to place the media facade. That will depend on the traffic around the building, which will be analyzed by data. Similar decisions will be made for many other components. All these decisions depend on efficiency, not aesthetic preferences of the author.

BB: Architecture of the future will be programmed by AI and big data. All human needs can be programmed into a building. Based on limitless data, a variety of scenarios could be written for each building.

VB: Don’t you think that the scenario that you just painted can lead to the creation of totally anonymous or even antihuman environment?

BB: It is the kind of Suprematist architecture that Malevich dreamed of.

VB: Didn’t you say earlier that there is no architecture without artistic qualities? Can art be produced without an author?

BB: Architecture of the future has to rely on four “E” – economy, ecology, energy efficiency, and ergonomics. It is high-tech mechanism without soul, if you will. The soul is in the technology and efficiency. Beauty is in the engineering of the structure, in its ability to conserve electricity in the most efficient way and not to harm the environment. But you are right, real architecture cannot be without the fifth “E” – emotions. That’s an intrinsic part of our code. For example, in our Hypercube, emotions are expressed in art objects such as graffitis and textures.

VB: The soul of your project is in the engineering solution and artistry of graffitis. Is that all? What would then be the role of an architect? To assemble the pieces?

BB: The role of the architect will be to determine the necessary percentage of this fifth “E.” How much – 60%, 20%, 15%? This task must be addressed by the architect. In the future the extent of art that’s needed in the object will be defined by an algorithm. Today buildings are still being designed by people and significant share in this process remains irrational and imperfect. The greater there will be the share of the machine-controlled design, the more rational will become our architecture. Finally, we are going to create much more rational architecture that was first conceived in the times of Constructivism and International Style.

VB: If that is the future we are heading to, I suppose, there will come a moment when all potential issues will be addressed, and questions solved. Architecture will become universal and programmable. Not very interesting. I hope by then, if we have any architects left, they would revolt against everything being so rational and efficient to bring real emotions back and a healthy dose of chaos. What do you think?

BB: Perhaps that’s what’s going to happen. Architecture is going through cycles and right now we are going toward optimization, rationalization, modularity, reliance on algorithms, and so on. The future will be decided by corporations that will hire any specialist to accomplish very particular goals. The architects will be transformed into codes and they will become the participants of the global automated process. The algorithm will be responsible for choosing the most relevant code.

VB: You also said, “Architecture is not a building but a function that it carries. Architecture is not hardware, not material such as concrete and steel, but software; in other words, substance.” But this software substance is not produced by architects. This means that we are going back to the architect’s very mundane task, to put things together.

BB: The substance is proposed by the architect. He doesn’t create it, but he can identify the existing forces and anticipate the appropriate services and organize them in the most efficient way. A good architect has to recognize these forces, whereas his client may not be aware of them. It is the architect who must pinpoint them and use to the project’s advantage. For example, it may take five years to finish a project. The need to retain a particular function may totally become obsolete over that period of time. This is why we need to design buildings in such a way that would enable us to bring new functions during both design and construction.

VB: Do you think an architectural form has exhausted itself and that it is no longer relevant?

BB: All forms and their combinations have been invented. The same goes for all facades and their variations. What we can do now is to invent new solutions for new problems. Our most relevant goal today is to solve social and ecological problems. Pure aesthetics is the thing of the past. Architecture is the impression or the cast of any given function, program, and time. Architecture is always the future. 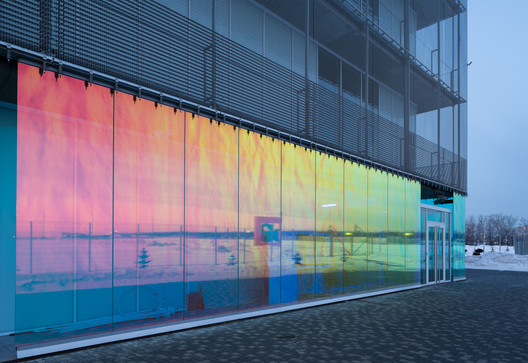