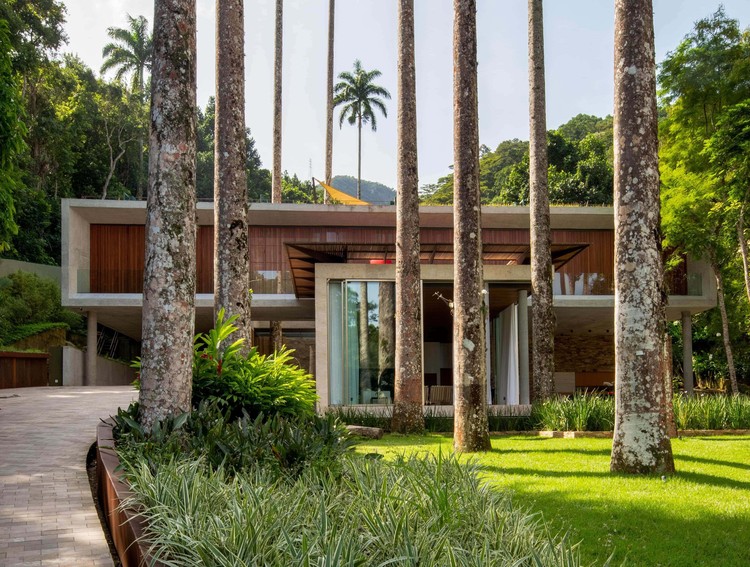 Text description provided by the architects. Casa Capuri emerges amidst the nature of the land where palm trees, river and sea oppose the urban.

The project started adopting two transverse rectangular-based prisms, supported by five pillars and a stone wall. The real perception is of a damping of the fifth facade. The large free spans and structural swings arise with the premise of respecting and preserving the thirty-six palm trees of forty meters to the land, so that the horizontality of the architecture positively confronts nature, bringing a sense of respect to the surroundings.

The gesture of the design shows the weight and subtlety very carefully, emphasizing the transparency that integrates the interior and exterior. Permeable facades face south and east in order to combat moisture and accentuate lighting.

The whole house is an invitation to new discoveries. The technical complexity is incorporated into the subsoil; the equipment becomes invisibly to meet the contemporary. Each planned space coexists in complete freedom among the large living areas. The dining room and wine cellar have a vertical breadth amid one of the inner courtyards.

We dealt with the different plans respecting the topography with the intention of configuring open and connected environments, we used the unevenness as a strategy for splitting them into three groups, thus ensuring visual contact yet isolating the flows, as well as segmenting them. The service is attached to the social area on the first floor, keeping in evidence the natural elements, both for indicating the division between the parts of the house and poetically for supporting all the weight of the upper floor.

The personality of the project is present in the decision to work with a mixed structure, using the metal to support spans of up to twelve meters, prestressed concrete slabs and also, the ribbed slab for the tennis court that has independent access to the roof.

Landscaping was a concern. It is precisely planned and present in the coverage of the prism valuing the very conservation of the slab. The water deserves attention, the swimming pool goes unnoticed inserted to the contemporaneity of the structure of the house downstairs. The deck both integrates the environment and is a fundamental part of the facade, as well as the large water mirrors that cause the sensation of buoyancy favoring the visual concept of the project.

So we prioritized architecture and feeling, living each day at Casa Capuri is like the infinite pleasure of a new experience.